This article is about Spike's Seesaws, a level in New Super Luigi U. For other uses, see Rock-Candy Mines-3.

Spike's Seesaws, or Rock-Candy Mines-3, is the third level of Rock-Candy Mines in New Super Luigi U. It is unlocked when Smashing-Stone Tower is completed, and its completion unlocks Rising Piranhas.

The level starts in a mountainous area with a Spike on a seesaw that tilts from time to time, followed by a ? Block. Another seesaw is found in front of another Spike. A seesaw that rises when it is jumped on is found, along with some Spikes. A Green Ring is found above the seesaw. The player must then jump onto another platform, where another rising seesaw. Multiple Spikes are found on both sides of the area. At the top of the area, a green Warp Pipe is found. Going through the pipe takes the player to an area with another seesaw with a Spike on it, along with the level's Goal Pole. 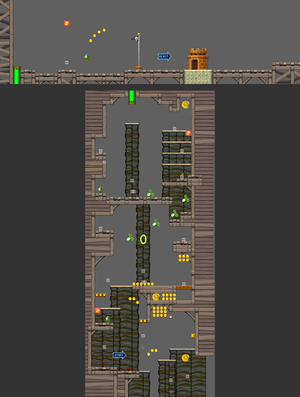