This article is about Dragoneel Depths, a level in New Super Luigi U. For other uses, see Sparkling Waters-5.

Dragoneel Depths, or Sparkling Waters-5, is the fifth course of Sparkling Waters in New Super Luigi U. It is unlocked by completing Waterspout Sprint or The Great Geysers, and its own completion will unlock Larry's Trigger-Happy Castle.

The level starts in an area with two ? Blocks and a Warp Pipe that leads to an underwater area. A Dragoneel is found in the underwater area, followed by a group of four moving platforms. A ? Block with an Urchin above it is found in the middle. The ? Block contains either a Super Mushroom or a Fire Flower, depending on the player's current form. A few Urchins are found falling from above, and a second Dragoneel's begins circling around the area. A second set of moving platforms in found, followed by more falling Urchins and a Blue Ring. A Brick Block containing a 1-Up Mushroom can be found to the right of the area. A third set of moving platforms with two sets of moving ? Blocks in the middle is found. After more falling Urchins, a Warp Pipe is found. The Warp Pipe leads the player back outside to a grassy area with the Goal Pole. 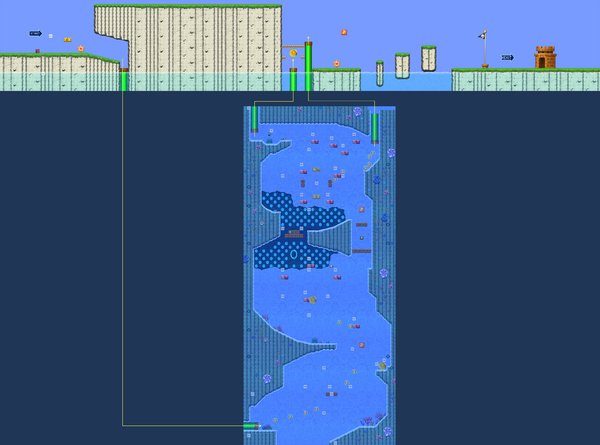