"0-2" redirects here. For information about the board from Mario Party: Star Rush, see World 0-2. 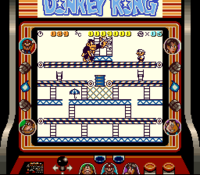 50m in the Game Boy game, played on the Super Game Boy

50m (or 50 m) is the second level of the Donkey Kong arcade game and Donkey Kong for the Game Boy. This level has a series of Conveyor Belts which run along the second, fourth, and fifth floors with the former two carrying hazardous cement tubs. This level has hammers to smash Fireballs and cement tubs. There are also ladders, which Mario must climb. The top ladders will also disconnect and connect when Donkey Kong beats his chest, which he does instead of throwing barrels like in the first stage. The oil drum in this level is in the middle of the stage, and produces more Fireballs to burn Mario. Lastly, because the top floor is a Conveyor Belt, Donkey Kong moves left to right throughout the level. However, he is harmless in this stage and Mario only has to get up there to beat the level. As Mario reaches the top, Donkey Kong takes Pauline again and climbs up to 75m.

Note: The Hat and the Parasol switch places in the Game Boy Donkey Kong.