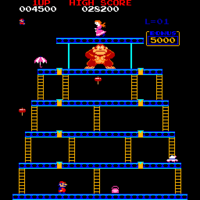 100m, the only stage in Donkey Kong featuring bolts

Bolts[1][2] (also known as plugs[3][4] or rivets[5]) are objects that Mario must destroy in level 100m of Donkey Kong. There are eight (six in the Game Boy version) orange bolts that are worth 100 points each. Mario must simply walk or jump across a bolt to remove it. After all of the bolts are gone, the platforms supporting Donkey Kong will collapse, allowing Mario to rescue Pauline. Removing a bolt also creates a gap that Fires cannot cross. If a bolt is removed while a Fire is on top of it, the enemy will become stuck over the gap. This allows Mario to safely jump over the enemy repeatedly to gain points.

Bolts reappear in Mario vs. Donkey Kong 2: March of the Minis. In level B1 of DK's Hideout, Mini Marios have to remove bolts around the stage to defeat Donkey Kong in a manner similar to 100m. They do so by walking over, jumping across, or standing on top of a bolt, which would then shrivel into nothing.