Magnet Sparkies[1] (originally known as Sparkies[2]) are a type of Spark in the Mario vs. Donkey Kong series that move along the edges of magnetized surfaces. 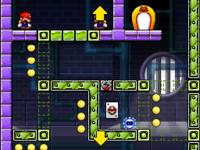 Sparkies first appear in Mario vs. Donkey Kong 2: March of the Minis. They only appear in Room 4-5 and Room 4-7 of Magnet Mania. They spawn from the red side of metal blocks with an "S" engraving, and slowly move clockwise. If a Magnetic Block is disabled from underneath it, the Sparky will vanish with it, and another Sparky will soon generate from its metal "S" block. They resemble Sparks from Super Mario Bros. 2, as they quickly flash between a white color with a light blue outline and a black color with a yellow outline. 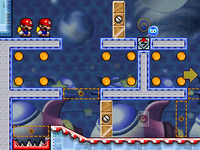 Magnet Sparkies reappear once more in Mario vs. Donkey Kong: Mini-Land Mayhem! In this game, they retain a solid white color and blue outline rather than flashing between colors. They act much as they do in their previous appearance, except they move at a slightly faster speed. Upon approaching the type of block it spawns from (now known as Magnet Sparky Generators[1]), it will briefly retreat inside the block rather than passing it by. They are introduced in Cosmic Adventure.