Not to be confused with Magnet Block. 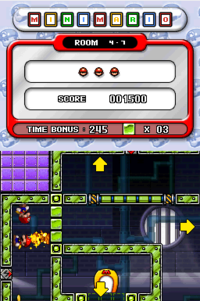 Magnetic Blocks are a type of Color Block in Mario vs. Donkey Kong 2: March of the Minis. They are first introduced in Magnet Mania. They are the same lime green color as magnetic surfaces.

If touched on the Touch Screen during gameplay, the blocks disappear and turn into dotted square outlines, which Minis can walk through. The blocks that are erased become stockpiled on a small counter on the top screen. If this counter has any blocks in it, more Magnetic Blocks can be added onto the stage, even in different sets of blocks. However, if the outlines are touched again, they become full blocks, and the counter's number decreases. No more blocks can be added when the counter reaches zero, unless more blocks in play are erased. When Magnetic Blocks are placed in the level, Minis can walk across them to cross gaps and reach the goal. Since they are magnetic, Minis can walk on them even if they are upside down or sideways. Unlike Pink Blocks, however, Magnetic Blocks can not block the Minis' paths, as Minis simply walk on the side of them when approached.

Magnetic Blocks can be used in the Magnet Mania kit, Spooky Attic kit, Special Kit 2, and Special Kit 3 when creating stages in the Construction Zone.