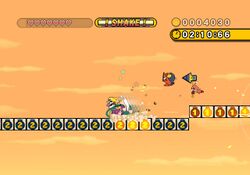 Wario running atop some Bomb Blocks

A Bomb Block[1] is a type of block featured in Wario Land: Shake It!. They also serve as platforms, if temporarily. Each Bomb Block displays a certain number, and when Wario walks across or touches them from the side, the number quickly counts down before exploding. They may also be activated when Wario shakes the ground, as well as when enemies are thrown at them. These blocks often appear in desert and volcano levels, such as Whoopsy Desert and Mt. Lava Lava. Both of these levels share a mission, requesting the player detonate every Bomb Block in that level. When a Bomb Block detonates, Wario and nearby enemies can be damaged in the radius of the explosion.