Slipshod Slopes is the third level of Quiver Cliffs in Wario Land: Shake It!

This is a level that is solely based on winter-themed elements. This level includes blocks of ice and icy ground as well, along with the Snowman Wario and Frozen Wario abilities. It also introduces Pengoons, Snowman Blocks, and the icy variant of the Flimflam. The background consists of icy mountains and evergreen trees covered in snow. Many icicles grow from the ceiling, which can be used as platforms or to defeat enemies. Wario would have to use an Earthshake Punch to dislodge the icicle. The floor of this level is also very slippery and will cause Wario to slide frantically if the player attempts to run. First, Wario needs to push ice blocks and stand on them to reach higher places, then he will have to become Snowman Wario and roll himself down from the slope to break Snowman Blocks to proceed. He also has to stand on moving ice blocks for treasures and coins. After that, he reaches an ice cave where he needs to pound down icicles to stand on them and move forward. In another ice cave, Wario should avoid icy Flimflams so as not to become Frozen Wario. Once Wario finds the caged Merfle, he will have to head back to the start before time expires. 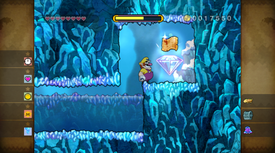 This level has a Secret Map leading to Bamboozle Village. In the first ice cave full of icicles, Wario must swim across the river. A diamond can be found at the bank. Performing an Earthshake Punch there reveals the secret map.