Launchpad Labyrinth is the first of three secret levels in Jiggle Jungle in Wario Land: Shake It! This level is unlocked by finding a Secret Map in Airytale Castle. This stage reuses assets from Stonecarving City, such as the music and background.

The level takes place in the ruins of an ancient city during sunset. The level completely focuses on Rocket Buckets and the spike poles it activates when used. Spikes also pose a threat. It is one of two all-escape levels in the game and has the longest time limit of 10:00:00. In six flying sections, Wario needs to maneuver the Rocket Bucket to collect coins, avoid spikes, find treasures and reach the tunnel to the next section. The golden enemy is a Floating Bandinero in the last flying section. 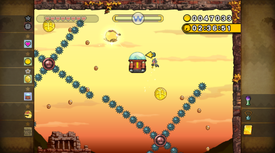