Neon City is a secret level in Rocking Range in Wario Land: Shake It!. It can be unlocked by finding a Secret Map in Glittertown, and it also has a Secret Map to Derailed Express.

Like Glittertown, this level features slot machines; in addition to bombs, Bumbleprods, balls, and (in one case) coins like in the previous level, these slot machines can release hot Flimflams and snow that turns Wario into a snowball. At the beginning of the stage, Wario stands on invisible platforms that can only be seen through spotlights. Then, Wario enters a building where he encounters the first slot machine. He must use the bomb from it to clear his way. Afterwards, Wario finds the first treasure, the way to which is blocked by a Snowman Block. Wario needs to use the second slot machine, avoid Shortfuses and make use of balls and icy Flimflam to get through. Outside the building, colorful fountains from Glittertown reappear, lifting Wario to a hidden tunnel where the second treasure lies and the golden enemy which is a Bandinero. In the next section, Wario should use the third slot machine to break metallic blocks with bombs and become Flaming Wario to get coins. He also needs to become Snowman Wario to fall down so that he can get the last treasure in the next section. The last section contains both fountains and invisible platforms. Once Wario finds the caged Merfle at the top, he will have to use the Max Fastosity Dasherator, strike several Certainy Switches and get back before time runs out. There is a hidden slot machine in Wario's running back that will reward him with 10,000 coins each time he hits the coin symbol. 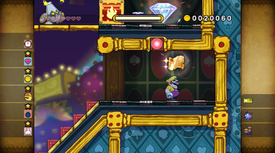 This level has a Secret Map to Derailed Express. In the section where the third slot machine appears, Wario needs to use a bomb from the slot machine to break the metallic block which directs to a large coin bag. Standing beside the coin bag and performing an Earthshake Punch reveals the map. 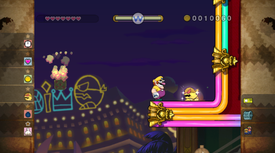 a - A hidden slot machine in the level can be encountered during Wario's escape sequence, and it produces an indefinite amount of gold coins worth 10,000 coins. Given the limited time of 150 seconds, the player can theoretically reach a sum of more than 150,000 but less than 200,000 if each Earthshake Punch gets coins.