Riverbloat Rapids is a secret level in Jiggle Jungle in the game Wario Land: Shake It! It is unlocked if Wario finds the Secret Map in Soggybog River, and it also has a Secret Map to Prism Prison.

This level has 10 sections, the most in the game. It takes place in a deep and dark jungle with brown, murky water and blue, gloomy trees. Logs float on the water that is driven faster by the endless storm. In the beginning, Wario needs to jump on logs to reach the bank where a Shortfuse and two Turkeyjerks are waiting to attack him. However, by shaking the Turkeyjerk, Wario can crawl into narrow places to get coins after the naked Turkeyjerk clears the way. Next, several Venus Guytraps of different heights grow here, guarding the coin bag on the tallest Venus Guytrap. Afterwards, Wario again jump on logs to across the river and reach a place where Boomdineros are walking back and forth to block Wario's way. The golden enemy here is a Bandinero behind a metallic block. After he jumps onto higher places, he encounters the vines again which is now surrounded by spikes, requiring him to carefully climb down. A treasure stands behind a Bonfire Block and a Boomdinero, and Wario needs to make full use of two fire Flimflams below to break the block and get the treasure. In the next section, Wario will have to use the ropes above and reach the large coin bag. After that, stone blocks and a moving Shortfuse block the way to the last section where Wario jumps on logs again and swings on a rope to reach the caged Merfle. Once Wario frees the Merfle, he will have to use the Max Fastosity Dasherator nearby to run on the water and back to the start before time expires. 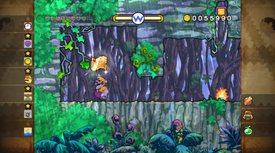 This level has a Secret Map to Prism Prison. Before Wario enters the last section where the caged Merfle is located, he will have to break several stone blocks below to reveal the hidden fire Flimflam, then he needs to become Flaming Wario to break the Bonfire Block above and get into the tunnel. When he gets out, he should become Flaming Wario again to break another Bonfire Block, behind which there is a diamond. Standing here and performing an Earthshake Punch reveals the map. 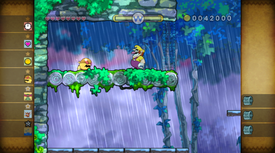