Lowdown Depths is a secret level in Wiggly Wilds in the game Wario Land: Shake It!, also one of the two all-escape levels in the game. It is unlocked by finding a Secret Map in Sneak Peak.

This level takes place in a cave at midnight filled with many forks in the roads. Blue rocks form most of the cave with moss and other plantlife growing from it. Inside the cave, treasures and coins are scattered all around, as well as Bandineros and Pitchforks. The caged Merfle is found right at the start of the level, so the majority of the level is an escape sequence. The instant Wario frees the Merfle, he rolls down from the slope and falls straight to the very depth of the cave, just as the title Lowdown Depths implies. There is a Max Fastosity Dasherator waiting for him at the corner of the depth, and Wario has to use it to rush to the right. The first section requires Wario to quickly choose a route in the face of several forks. The first treasure can be obtained only if he chooses the deeper route and avoids being struck by rocks. In the second section, Wario can see the bright blue sky where a Floating Bandinero roams cozily, which is the golden enemy in this level. Proceeding forward, Wario should break stone blocks and use Certainy Switches to get coins and the second treasure, in the meantime jumping up to the next section. Entering the fourth section, Wario can jump on the rope above the water full of Scarracudas only in max speed and collect hidden coins, then breaking stone blocks and switching the direction to the left. The fifth section is where the last few stone blocks lie, and it should be easy to pass. In the sixth section, Wairo encounters the long moving platforms from Savannah Valley, and he needs to stay on them with his max speed so as to break metallic blocks for the last treasure and a diamond. As Wario enters the last section, he must strike the Certainy Switch to collect the last few coins. Eventually, he manages to come back from above and leaves the cave with all coins and treasures before time expires. 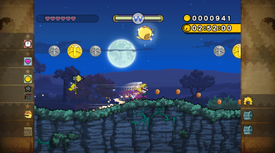