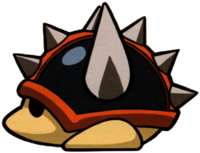 Bumbleprods are enemies that appear in Wario Land: Shake It! They are somewhat similar to the Spiny enemies from the Mario franchise.

Bumpleprods look like yellow turtle-like enemies with metallic, navy blue- and orange-striped, helmet-like shells similar to those of overworld Buzzy Beetles from Super Mario Bros. The shell has two sharp horns and spikes going along its top. These enemies do not attack, but they hurt Wario upon contact; they serve as obstacles that move back and forth.

Wario can attack them only by using an Earthshake Punch to flip them over, and then Ground Pounding them to defeat them. Bumbleprods are also seen in various boss battles, such as Bloomsday Blowout. A giant Bumbleprod made of smaller Bumbleprods is also conjured during the battle with the Shake King in the second phase. There is also a golden variant.