Not to be confused with Spikey. 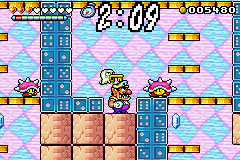 Spikies[1] are enemies in the Game Boy Advance game Wario Land 4. They appear as yellow heads with red feet that wear pink spiked shells, resembling Spinies. Their shell hurts Wario on contact and are immune to his Smash Attack (initially) and ram attacks. There is also no way to grab them. Their weak point is their unprotected underside.

The most common way to defeat the Spiky is by performing a Smash Attack around an area where they are seen, causing them to flip over and to be stunned for a few moments. Another Smash Attack directly on their underside will defeat them, rewarding Wario with a Silver Coin. They can also be flipped over by jumping into their underside from below or by pushing them against a wall, which can be safely done when Wario is invincible, for example as Flaming Wario. When another enemy is thrown at them, they are defeated immediately. As with most enemies, Spikies are also defeated when Wario simply touches them during a certain transformation, such as Zombie Wario or Fat Wario.

A variation known as Harimen Zetto exists as well, which have a black shell and are more difficult to defeat.