Kuro Neko (lit. "Black Cat") is a character in the Game Boy Advance game Wario Land 4. She acts as Wario's enigmatic guide throughout the game. The cat's true form is Princess Shokora of the Golden Pyramid, who once ruled the area.[1] The cat makes small appearances throughout the game, such as on the map screen, and within the corridors before facing an area boss. In the final boss area, Kuro can be seen transforming from the shop owner, an additional form who runs the game's Item Shop. The cat makes a prominent appearance in the end-game sequences, where she leads Wario out of the Golden Pyramid and her true princess form is revealed. 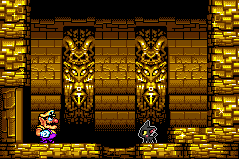 The black cat and Wario entering the Golden Pyramid.

The black cat is seen at the very beginning of Wario Land 4 in the animation sequence before the file select screen. She can be seen crossing a road whilst Wario speeds towards her in his Wario Car, almost hitting her. A newspaper flies into her face, which reads "LEGENDARY PYRAMID DISCOVERED DEEP IN JUNGLE!! Legendary treasure nearly found, but accidents hindered findings".

The cat precedes Wario in reaching the pyramid, and she leads him to the game's main room. The cat is seen again on several instances throughout the game, such as in the boss corridor entering the Item Shop. The cat also appears to have the ability to transform into other forms at will, namely the shop owner and its associated forms which can be purchased to assist in defeating a boss. The shop owner can only be seen transforming into the cat against the final boss, the Golden Diva.

When the player faces the Golden Diva, the cat attempts to attack her, although it is ineffective. The Golden Diva then appears to suck the cat up her nose, and the player proceeds with the boss fight. After the lips are defeated, the cat emerges, and she leads Wario out of the pyramid before it crumbles to the ground. After escaping, the cat transforms a final time into Princess Shokora, who wears the Golden Diva's jewelery. After saying thank you and kissing Wario on the cheek, Princess Shokora is lifted into the sky by four cherubs.

A white cat instead seen crossing the road in the game's ending sequence, in a nod to the game's opening sequence. However, the newspaper now reads "Steaks! Eat as much as you can!!".