This article is about heart-like items from the Mario franchise. For other uses of the term "Heart", see Heart (disambiguation).
Not to be confused with Spinning Heart.

Hearts are recurring items in gaming, including the Mario games. They can usually be collected to gain more hit points or chances.

In Yume Kōjō: Doki Doki Panic, up to two hearts are located in each stage, and they are found only in specific Subspace locations within the stage. They add an additional mark or heart to the life meter, up to four. The meter then resets to two marks at the start of the following stage. Hearts were replaced by Mushrooms in the altered Mario version of the game, Super Mario Bros. 2.

A small version also appears in this game, which is retained in subsequent versions.

In Paper Mario, after defeating enemies in battle, Mario and his partners may find Hearts left behind in the overworld. Each Heart found restores one HP to Mario. It returns with the same purpose in Paper Mario: The Thousand-Year Door, with the addition of healing the partner that is currently out as well.

In Paper Mario: Sticker Star, they are made of cardboard and replenish 5 HP of Mario's health, and are found in other places such as behind bushes. In Paper Mario: Color Splash, each regular heart restores 40 HP. One heart is also found at the Prisma Fountain for every Big Paint Star retrieved; when they are all returned, the fountain they fill heals Mario instead. Hearts (now called Healing Hearts) reappear in Paper Mario: The Origami King, where their size and appearance dictate the amount of HP they refill. The small red ones heal 30 HP, while the medium ones heal 50 HP, and the large ones with white accents heal 100 HP.[1]

Hearts appear in the GBA version of Mario Bros. included with the Super Mario Advance series and Mario & Luigi: Superstar Saga. They are one of three items that can appear from an Egg in a garbage can, which is exclusive to 2-Player Vs. Mode; if found, they work as they do in Super Mario Bros. 2, turning Small Mario into Super Mario.

A heart in Luigi's Mansion

In Luigi's Mansion, hearts come in two sizes. The smaller restores 10 HP and the bigger restores 50 HP. The 10 HP heart can be upgraded to a slightly bigger one that restores 20 HP after fulfilling certain conditions. In the PAL version of the hidden mansion, hearts are quite rarer.

Hearts appear again in Luigi's Mansion: Dark Moon where they function similarly to in the original game, however they now only restore 25 HP at a time. 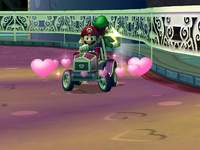 The Heart item in action in Mario Kart: Double Dash!!

In Mario Kart: Double Dash!!, the Heart appears as the special items of Peach and Daisy, but Petey Piranha and King Boo can also use the item due to them being able to use any special item in the game. When used, two small pink hearts appear and circle around the kart. These hearts protect the kart from up to two obstacles or weapons on the course. The racer can then use the new item as they please. However, Spiny Shells, Chain Chomps, and Bob-omb explosions penetrate the hearts. Lightning attacks and falling off the course destroy both circling hearts. Also, any fireballs received do not multiply by five when thrown. If a green fireball hits a heart, the icon for the green fireball received is a red fireball.

When an item hits the player's heart barrier, a sound similar to that of the Spinning Heart from Super Mario 64 and its Super Mario 64 DS can be heard. If a character activates a heart after being shrunken by Lightning, the hearts circling the kart remain small even after the kart reverts to normal size.

The Heart reappears in Mario Kart Tour as the special skill of Peach, Daisy, Wendy, Pink Shy Guy, Pink Yoshi, Baby Peach (Cherub), Daisy (Fairy), Baby Mario (Koala), and the Peach Mii Racing Suit. They look similar to the hearts from Super Mario Odyssey, except they are colored pink like the Heart in Mario Kart: Double Dash!!. They merely block opponents' items in this game, including Lightning, rather than enabling drivers to snatch and use these items. In addition, up to five hearts can be used at once. Activating a Heart grants players points. Unlike in Mario Kart: Double Dash!!, the Heart has a set time limit for use of 20 seconds, and when the timer exceeds, the Heart disappears. When Heart+ is active, a second Heart appears alongside, much like in Mario Kart: Double Dash!!, except the extra Heart disappears more quickly.

Small hearts are present in Yoshi Topsy-Turvy where they restore one point of Yoshi's Smile Meter when swallowed. There is a rare variation of these hearts called big heart, which restores all of the health back.

Small hearts with eyes and feet appear in Yoshi's Woolly World, Poochy & Yoshi's Woolly World and Yoshi's Crafted World, in a role similar to Stars in the Yoshi's Island games. They help restore lost energy and can be collected by touching or eating them. They often come out of Winged Clouds in groups of three or five. In addition, any enemy that is caught on-screen when Yoshi reaches a checkpoint turns into a heart. Once they land on the ground, hearts begin hopping in a certain direction, falling off ledges and turning the other way if they meet a wall. They start flickering and eventually disappear if Yoshi does not collect them in time. Unlike Stars, hearts do not appear as coins when Yoshi's energy bar is full.

While hearts appear in the Wario Land series, they do not serve their traditional purpose in the first three games. In Wario Land 4, Wario's health is represented by hearts. He can have a maximum of eight hearts at any moment, and there are three different types of hearts that can be collected: "regular" hearts, which replenish one unit of health and can be found in set positions within levels, "big" hearts, which fully heal Wario and can only be obtained from Full Health Item pickups, and little hearts, which appear as red dots that most enemies drop when defeated. Collecting eight little hearts replenishes one unit of Wario's Heart Meter. Hearts are also used to represent Wario's health in Wario Land: Shake It!, with garlic being the item used to replenish them.

In Wario: Master of Disguise, hearts return as Wario's health as well as items used to restore it. As items, hearts are occasionally dropped by enemies when they are defeated. They can also be created by Arty Wario after he receives the Arty Mastery Gem upgrade, if the player draws the shape of a heart on the screen. Hearts dropped by enemies start blinking and eventually disappear if they are left uncollected, while hearts made by Arty Wario remain indefinitely (until Wario leaves the current room).

In Super Princess Peach, hearts can be found by breaking blocks or occasionally by defeating enemies; they restore one HP. A rare bigger version may also appear, which restores two HP rather than one.

In New Play Control! Donkey Kong Jungle Beat, Donkey Kong's health is measured with three hearts, a change from the original game where he simply loses bananas when damaged. Hearts can be found sitting still in certain locations and also appear after 200 or any multiple of 500 bananas are collected, provided he is missing one; otherwise, he obtains a 1-Up Coin.

In Donkey Kong Country Returns, its Nintendo 3DS port, Donkey Kong Country: Tropical Freeze, and its Nintendo Switch port, each Kong has two heart points. In single-player, if a Kong is currently assisting Donkey Kong, the Kong assistant is the first to lose their heart points upon touching harmful objects, followed by Donkey Kong; in multi-player, Donkey Kong and the assistant lose hearts alternately. When the partner Kong loses both hearts, they fall off-screen, and Donkey Kong loses that Kong's assistance. Heart points can be restored by collecting heart items, encountered commonly in levels, usually floating in mid-air. Some hearts can be obtained from certain item containers and Item Handles, or released by bosses when hit, provided the Kongs are missing heart points in their health meter; if the Kongs already have a filled health meter, they might obtain a banana in either situation instead. An alternative way to regain health is by breaking a DK Barrel. Heart items are completely absent from levels during Mirror Mode in Returns and Hard Mode in Tropical Freeze, and the Kongs have only a single health point each.

During Funky Mode in the Nintendo Switch version of Donkey Kong Country: Tropical Freeze, all Kongs receive an extra heart (bringing the total to three), whereas Funky Kong has five hearts.

Hearts appear as an item in the Blazing Bobsleigh Dream Event in the Nintendo DS version of Mario & Sonic at the Olympic Winter Games. In this event, hearts appear scattered throughout the course, and partially refill the player's HP meter when collected. They also appear in Snow Machine Fight, where they restore half of the total health when collected.

Hearts appear in Mario Party 10 exclusively to the Bowser Party and Bowser Challenge modes. In this game, the characters start off with six hearts, which are lost when taking damage in a Bowser Minigame. The characters can gain extra hearts from various events and locations around the board, however they can also lose hearts from Bowser spin wheels and other events. If a character loses all of their hearts, they leaves the vehicle and are no longer able to roll Dice Blocks. While players are eliminated, they can get Special Dice Blocks for the remaining teammates in the vehicle. In Bowser challenge mode, the player plays through all of the Bowser Minigames as Bowser, and aim to obtain as many hearts as possible from the other characters. The final score is given as the number of hearts that the player managed to collect in total at the end of all ten minigames.

Hearts make their first appearance in the Super Mario series in Super Mario Odyssey, where they are red with black eyes. Each heart restores a wedge of Mario's health. Hearts give 5 coins when collected while being at full health. Another item known as the Life-Up Heart, which works like the Life Mushroom does in the Super Mario Galaxy games, also appears.

Hearts in Dr. Mario World are used as a stamina counter. As long as the player has at least one heart, they can play a level, and players earn a heart if they clear a stage (prior to version 2.3.0, they are rewarded from stage clears only for the first time). Hearts are gained automatically as time passes until it reaches the maximum of 10 hearts (5 prior to version 2.3.0), but can also be purchased with Diamonds. Players can gain 5 additional hearts for 10 diamonds, while players can gain 60 minutes of infinite hearts for 30 diamonds. Players can receive up to 20 hearts from friends per day (10 prior to version 2.1.0), and players can earn hearts in battle boxes. Since version 2.4.0, if the user made in-game purchases prior to the update (this update removed all in-game purchases), they have unlimited hearts.

In Mario Golf: Super Rush, hearts replenish half of their stamina gauge. They only appear in the Speed Golf and Battle Golf modes.