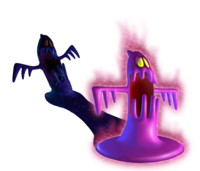 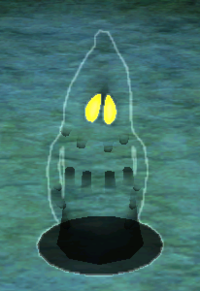 A Black Bogmire[citation needed] (also referred to as a Bogmire Shadow)[citation needed] is a weak clone of Bogmire, found in the game Luigi's Mansion. They are spawned one at a time from Bogmire's actual shadow, though after Bogmire loses specific amounts of his health, they can be spawned by lightning, in which case they are produced only a few at a time. Black Bogmires are transparent, with a small white outline showing their general shape, a shadow underneath, and yellow eyes.

Black Bogmires attack Luigi by slowly lurching towards him, but Luigi can use them as projectiles to defeat Bogmire. Luigi can suck up a Black Bogmire with his Poltergust, which gets stuck as a ball on its nozzle. Luigi can then aim and blast it at Bogmire to trap him in a large black bubble, making him vulnerable. Alternatively, shooting it anywhere else causes the ball to fall apart, destroying the Black Bogmire. Once Luigi starts sucking up Bogmire, he will try to pull Luigi through any active Black Bogmires on the field to break him off and cause damage. They come in two sizes, with small ones being about as big as Luigi and large ones being nearly twice his size. The smaller ones are easier to suck up, but the larger ones do a better job of weakening Bogmire, thereby allowing Luigi to deplete more of the former's health.