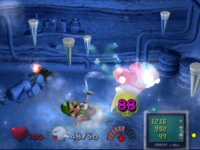 Sir Weston, the Chilly Climber is an arctic explorer ghost that loves the cold. He loves freezing temperatures so much, he resides in the Cold Storage in Luigi's Mansion where he is a portrait ghost encountered during the events of Luigi's Mansion. His portrait number in Professor E. Gadd's gallery is 18.

Apparently, Sir Weston has not "warmed up" to the idea of being a ghost and keeps himself trapped in his ice sanctuary. Sir Weston has even encased himself in a near impenetrable block of ice, forcing Luigi to figure out a way to melt the ice.

There are two logs and a campfire in the Cold Storage. Lighting the logs on fire unfreezes Sir Weston. He becomes enraged because of the heat and launches waves of ice at Luigi. Simultaneously, icicles fall from the ceiling, causing twenty Hit Points' worth of damage every time they hit Luigi. While Sir Weston is unfrozen, Luigi can capture him. Sir Weston has a medium pull. A treasure chest containing the key to the Artist's Studio appears after Sir Weston is sucked in.

Sir Weston has icy blue skin, a circular head, pale yellow eyes, and large expressive teeth. He is cloaked in an anorak and has a red knapsack on his back.