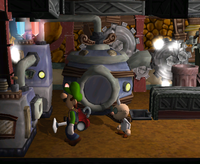 “Take a gander at this. This fine piece of work took nearly twenty years to develop! I call it the Ghost Portrificationizer!”
—Professor E. Gadd, Luigi's Mansion

The Ghost Portrificationizer is a machine invented by Professor E. Gadd that is located in the Portrificationizer Chamber in Luigi's Mansion. The machine can turn any ghosts trapped within the Poltergust 3000 into portraits. After the player has completed an area of the game, Luigi takes all of the ghosts that he captures and turns them into portraits. Each ghost looks different in its frame; each has a different pose and possibly a different frame color—the frame color depends on how efficiently Luigi captures the ghost.

The Ghost Portrificationizer has a metal lip to which Luigi can attach the Poltergust 3000. A blue section of the machine separates the common ghosts from the portrait ghosts. The machine then finishes its process by resizing, squashing, and framing the ghosts. The portraits are then dispensed from the end of the machine, able to be hung in the Gallery for later viewing. The Ghost Portrificationizer can work backwards; in the final cinematic of the game, Mario is reverted from a portrait back into his human self, with the process being painful and overwhelming for him, leaving him very dizzy and semiconscious afterwards.

The Ghost Portificationizer is referenced in Luigi's Mansion: Dark Moon. As E. Gadd is about to mention it, he is interrupted from a reaction of the Parascope. 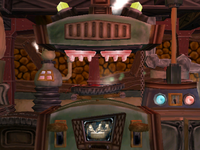 The three ghosts from the Space World 2000 one-second reel
Retrieved from "https://www.mariowiki.com/index.php?title=Ghost_Portrificationizer&oldid=3828099"
Categories: