It has been requested that this article be rewritten. Reason: poorly worded, not sourced properly and needs to be organized as indicated on MarioWiki:Pre-release and unused content

Different kinds of houses were proposed for the game, including an apartment complex, a dollhouse, a "ninja mansion", a Japanese-style house, a prairie, and a desert level using a Mario theme. The game was originally conceptualized to resemble the Mario series more closely, but strayed when the haunted western mansion concept took priority.[1] The idea of multiple, Mario-esque themed houses would later be used in the game's sequel.

Luigi's Mansion was developed with stereoscopic 3D compatibility. The Nintendo GameCube was built with 3D components which could be activated by an unreleased add-on.[2] This add-on was never released as its price would have been far greater than the console. Another unreleased add-on would have allowed the Game Boy Advance to be used as an external controller in conjunction with the game.[3] The game's remake and sequel both support stereoscopic 3D, as they were released for the Nintendo 3DS.

Concepts for Luigi's Mansion, such as character designs, were being planned during the Nintendo 64's lifetime.[1]

The game was first revealed at Nintendo Space World in 2000 as a tech demo,[4][5] designed to show off the graphical capabilities of the Nintendo GameCube.[6][7]

Nintendo then decided to make Luigi's Mansion into a full-fledged game, and was later showcased at E3 in 2001, with notable changes to the design of the disc.[8][3]

Old issues of Nintendo Power (pictured below) contain details of early elements in screenshots and descriptions.

In earlier builds, the Poltergust 3000 originally featured a pressure meter ranging from one to ten, and was slightly bigger.[8] If the pressure meter reached ten, the vacuum would backfire and burst out flames, causing Luigi to fall over and lose health, his HP eventually raises back up slightly after a while.[8] Earlier versions of the game allowed Luigi to spray water infinitely.[3] The Poltergust 3000 also had different nozzles depending on what element was being used.[9] Later versions of the game had the pressure meter be updated to a "Ghost Counter", which, truthful to its name, counted ordinary ghosts, portrait ghosts and boss ghosts; similar to the previous iterations, the counter would stop to ten.

Luigi's total remaining health was shown as a fraction.[3] Coins also had their own meter.[3] Early builds reveal that Boos captured would be displayed by a whole number.

Originally, the Game Boy Horror had an LCD border, which would function as a red flashing radar to show Luigi the locations of both ghosts and Boos within a room, and had a clock function.[3] One clip shows that once the clock reached 1:30 on the E3 Nintendo Booth version, E. Gadd would contact Luigi and send him back to the title screen.[10] Early gameplay images from newer builds reveal that instead of showing Luigi his current gold total, the Game Boy Horror was subsequently altered to always display a first-person view camera, giving the player two perspectives in a room at once. 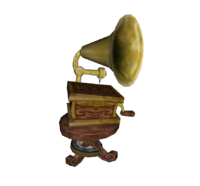 This is the unused phonograph model. It comes with two animations.

There are three renders of Luigi left in the game's data for the ending, each with a varying degree of happiness. The renders are a depressed Luigi holding a flower (worst), a pleased Luigi with a peace sign (good), and another pleased Luigi with two peace signs (best).[12] An unused model for Mario, labeled "bmario", is stretched to Luigi's proportions and given the backstraps for his Poltergust 3000, possibly suggesting that multiplayer was originally planned.[9]

Textures for cyan and blue-colored Ghost Guys along with two unused, non-functioning actors for them are also present in the game's data.[12]

The unused Poltergust 3000 along with the larger equipment still exists as well, along with two unused nozzles used for dust and water labeled "wpair" and "wpwater" respectively.

During an Iwata Asks interview, the developers mentioned a scrapped multiplayer mode where Luigi would meet another Luigi.[15]

On June 26, 2019, a modder by the name of KIRBYMIMI was looking through the code for Luigi's Mansion specifically for routines on memory referring to Luigi. One address/value referred to the quantity of Luigis that are spawned in game, and adjusting it would cause a second Luigi to appear, though without a Poltergust. This Luigi was also formerly inputless, but it became possible for a second player to control this other Luigi by adding custom code which makes him use the second controller. This Luigi shares the same animations as the original Luigi, but has difficulty opening doors and cannot pick up objects. The second Luigi also ignores any commands which take away player input, which means he can walk during most cutscenes; he can also suck up ghosts if the Poltergust was manually added. If the two Luigis move away from each other in a certain distance, the screen splits horizontally and the game does this automatically, meaning the multiplayer mechanic existed within the game's code. Additionally, the second Luigi is able to vacuum the same ghost the first Luigi is vacuuming if timed correctly. This multiplayer experience came to fruition with the inclusion of Gooigi, who shares some of the same coding and limitations of this second Luigi, in the game's Nintendo 3DS remake.[16]