What do you mean?

Failure to save result debate[edit]

I've heard diferent rumors about what would happen if Luigi failed to save Mario in time. Some say he becomes a zombie, others say depression. What's the REAL truth?Shadow Master 11:45, 18 November 2011 (EST)

The truth is you would get a Game Over

Well, duh. Those are suggestion for the Game Over screen, but you're right.

But this type of talk belongs on the forums, so please take it there unless you're attempting to improve the article with these comments. Bop1996 (Talk)

I don't get this is it extremely depressed Luigi or zombie Luigi?

It's still creepy. You can't argue on that.

The game over screen image's description says "Luigi was possessed by ghost". But how can we be so sure that he was?! He could have been extremly disapointed. Kingfawful4321 (talk) 16:30, 12 February 2013 (EST)

It never was the game over screen it was a rendered animation for the E3 trailer but the expression Luigi has was ment to be used for the end screen depending on your grade. Luigi was just ment to be super depressed. Donaldthescotishtwin

Do you know it's the Game Over screen?

Does this still need to be rewritten? The structure is sound and the writing has been improved since the rewrite template was added. [1] GBAToad (talk) 12:23, 18 May 2013 (EDT)

I looked on page 18 on the Luigi's Mansion manual(You can also see this on pgs.11,12,16,23,24,and 28)- and a picture caught my eye on the Gameboy Horror- the money icons(coins, dollars, gold bars) were PIXELATED, not 3D(Not EYE POPING 3D, cause the GameCube removed that). This could've been the icons for the Nintendo 64, or the beta. I actually think nobody knows about this!

Yours, The Mario Man

This is confusing, so I looked into it myself. Turns out the icons are indeed different, but they're definitely not "pixelated" as you call them.

I dunno if this is his official name or anything, but a lot of different places add a beta boss referred to as the "Elh". I don't know much about him but he's not on here, I don't think. Can someone look into this? Peanutjon (talk) 13:20, 26 June 2014 (EDT)

I think it might have been some kind of early, beta version of Bogmire. King Dark Bowser

There is no evidence to say that the timer was used for anything other than kicking people out of the demo. --Hiccup (talk) 10:35, 5 August 2014 (EDT)

I'm glad that the timer wasn't in the final game. It would probably take a LOT of tries to complete the game in a day. And the worse part is, if you kept failing, you'd see that stupid Luigi-possessed-by-a-ghost-and/or-extremely-disappointed scene. King Dark Bowser

i found a better version of the beta theme[edit]

All the cutting and editing people have done to attempt to "improve" this article has really made it worse. There are non-sequiturs all over, references to other lines that don't exist anymore, poor explanation, and the gallery I think has more content and description than the actual article. Stop worrying about adding pictures and start worrying about adding words. Or meld the pictures into the article, because at the moment I think this article was better with the un-cited stuff. At least then it was coherent. Meganerd18 (talk) 23:44, 22 June 2015 (EDT)

What revision did you think was when the article was better with the un-cited stuff? You can contact the user who made the sweeping changes. I believe it's Time Turner (talk), but I suggest parsing through this page's history and click on the corresponding cur/pre buttons on the left of each revision. I wouldn't support reverting it to its original state, as it's better to have factual information with poor writing than made-up unsourced information with good writing.

Agreed, I'm probably going to upload many pictures to fix those un-cited sources and try my best to bring back the version, which explained the beta in great detail once more sometime soon, until a user started removing and removing large portions of the article because of it lacking significant references. And I'll use photos and links for references, as I also do think that the gallery explains the beta more than the article's writing itself. --Michael (talk) 11:44, 1 May 2016 (EDT)

In E. Gadd's Lab, you can use an Action Replay code to walk around E. Gadd's Lab, which through doing so you can find a number of interesting things, such as a climbable ladder that leads nowhere and an out-of-sight door that say "Training". (More on that here.) I think that this should have at least 'some' sort of coverage on the Wiki, but I'm not sure exactly where. I was thinking maybe here, but I'm not quite sure what section we would put it in. The other place I'm thinking we could put it is the page for E Gadd's lab, probably in the trivia. I'm thinking it could maybe go in both, but now I'm not sure if it should go in here, not sure if this would be a great place for it to be out in. So what do you guys think? Thanks! TheDisneyGamer (talk) 10:57, 21 October 2015 (EDT)

I'm not sure if it's just me or if the Vase is displaying some sort of optical illusion, but the Blue Vase isn't blue from my eyes. I'm actually seeing it with hues of Grey and Gold Stripes, anyone else experiencing this? --Vaati (talk) 16:47, 26 February 2016 (EST) 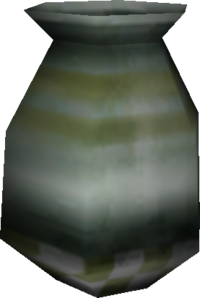 The Vase in Question.

I know this might not be important, but I found a YouTuber, CyberTanuki, of whom tried his best to make his own beta version of Luigi's Mansion and I thought it was worth checking out his YouTube video! He worked with two other YouTubers, AbsoluteG and Catley, on the project and I thought it was interesting. So I decided you guys should check it out, as I thought it was a 70-80% glimpse to what the beta might've been like, had the beta elements not been removed. --Michael (talk) 11:00, 2 May 2016 (EDT)

They've all deleted their channels for some reason, but the revival project trailer is archived here and CyberTanuki created a new channel here. They said in the comments of this video that the project is still in development under the title "Luigi's Mansion: Beta Rebirth". Raymond1922A (talk) 17:00, June 2, 2019 (EDT)