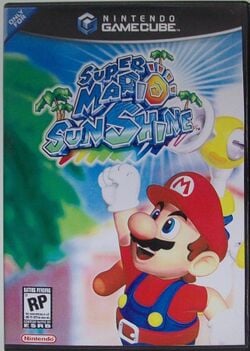 In Super Mario Sunshine, Delfino Plaza is the main plaza of the game. However, in trailers before release, it showed that there was going to be a different plaza (or a possible early Delfino Plaza), with a giant Strollin' Stu-like creature called "Hinokuri2" walking around the place, spawning Strollin' Stus (themselves having a design that looks similar to Hinokuri, additionally more closely resembling Goombas), with many other elements not seen in the final. The enemies were removed and the plaza was changed to one closer to the final by the next trailer. It also appears that in the E3 2002 trailer, the giant Strollin' Stu and Dango would chase Mario around like a normal Strollin' Stu.

The build also reveals that humans were intended to be citizens of the plaza. FLUDD was going to be skinnier. Gooper Blooper was going to be dark blue and fought on top of the bridges of Ricco Harbor instead of in the market and helicopter area.

Shine Sprites' design went through radical changes during the development.

Additionally, Mario's life meter would simply be a sun with a number in the middle indicating his health. The water meter was originally placed in the center of the "sun" life meter. The FLUDD pack was actually Nintendo's third favorite choice, with many other forms of water-pump functionality suggested. One other notable device that was a favorite was a water gun, but it was rejected due to controversy in the United States at the time.

Whenever Yoshi got hungry he would always be colored green, instead of flicking colors in the final version. There were some abandoned sprites as well, including Yoshi vomiting any water he may have swallowed.

There was also going to be a brown Pokey species, which was going to have white flowers, and black colored Piantas as well.[1]

Where the Gatekeeper is encountered in Delfino Airstrip, there would have floral-like pedestals surrounded by graffiti. Instead of the runway being sunk, it would have been "leveled". Blue Toad and a Pianta would have been on the pedestals.[2]

Within the game data is an unused camera behavior that suggests that the developers originally intended for a multiplayer mode to be in the game.[3]

A book is found behind a door in some ruins-like structure in Episode 3 of Noki Bay. The player can see it by turning the camera. There is a glitch in the game that allows Mario to reach the book, but there is no known way to get out of the structure afterward.[4] The door does not work from any side and it looks different from the doors in the hotel in Sirena Beach.

Presumably for the sake of completeness and/or not crashing the game, every area in the game has data for a 100-coin Shine Sprite defined for where the Shine spawns if the 100th coin is collected there. However, for the following areas, it is impossible to get a 100-coin Shine due to a lack of coins either in the level itself or in the surrounding areas:[5]

Early releases of the game had the sun window to shine brighter when the camera was staring at the sun, while retail copies have the lightening effect reduced.[6]

More kinds of goop are available in the game than are actually used, including goop that acts like quicksand and goop that instantly kills Mario when he touches it.

The Japanese version of the game contains an extra ARC that was removed from later releases, named message.szs. Its only contents are two message files, named station.bmg and system.bmg. One contains a list of stations and harbors for the levels, while the other contains dialogue for buying tickets and getting them stamped. As a number of the locations listed are landlocked, it must be concluded that these files belong to a scrapped train system for the island. Given the locations listed, this would have been the primary means of accessing levels in the game. Pinna Park is among the listed locations, as are several other presumably island locations. This implies that either there was a bridge to Pinna Park, the train is a subway, or that Pinna Park was not always on the tail island.

There are text leftovers for some sort of train system that was used to move from area to area instead of or in addition to Rainbow Ms. This appears to be a list of stations on the railway. The actual list is in Japanese, so the translated names are listed below. Notice that this list is very similar to the list of levels given in the unused title screen menu, except that Lighthouse Island is new. In the final game, the only lighthouse on the island is in Delfino Plaza.

These snippets belong to what would be dialogue trees.

A test level is playable through an Action Replay. The level texture is mainly numbered checkered tiles in different colors. The player can see Rock Blocks that were edited out, possibly in favor of Watermelons.[7] The giant Strollin' Stu appeared but did not have a two-eyed onion-like mask. It is difficult to see it since it falls through a wall in a pit when the level starts. Near the back of the level, there is a snow cone stand. Mario can bounce on the top as if it were an umbrella or other bouncy object. There is also a Noki that was covered with goop in the level. When Mario finishes cleaning him, Mario can see he does not have a shell.

There are six Red Coins in the level, along with one gold coin. There is also a shine sprite, that if players were to get it, save, and turn the game off, they would then not have to play the beginning part of the game. The game will continue normally, with no extra shine sprites or any signs that the test level has been accessed. There is also green plain gloop all over the level that does not harm Mario.

The giant Strollin' Stu is actually a yellow figure with an eye at the top. In the SpaceWorld trailer, it is wearing an onion-like mask that has two eyes on it. If one were to hack the game, one of its sprites would show it wearing a skull-like mask.

Hinokuri2 is an unused giant Strollin' Stu-like enemy. Hinokuri2 has yellow legs and red-orange color blending with yellow. If its shell breaks, the inside is just yellow. If brought into a game, Hinokuri2 would drop Swoopin' Stus or Strollin' Stus from a nozzle on its back. Players must spray water into Hinokuri2 until its outer shell pops, and then stomp on its eye, dropping one coin. In the SpaceWorld demo, the Strollin' Stus it spawns have a design more similar to it, including the large orange top piece.

Six area themes have Yoshi drum variants available for them despite Yoshi being unavailable in those areas:

A music file for the track heard in the original SpaceWorld showing of the game and in the demo movie seen by waiting on the title screen can be found in the game's files. While the track is heard in-game, the music and sounds heard in the demo video are all part of the video file, meaning that this file goes unused.

The internal names for many of the "secret" levels indicate they were originally planned to be accessed in different areas than the final; for example, Turbo Track is named for Bianco Hills and The Shell's Secret is named for Ricco Harbor. A large amount are named for Corona Mountain; of them, only the lava-filled cavern is relevant to it in the final.