This article is about the boss from Super Mario Sunshine. For the species, see Wiggler.

“That caterpillar sure woke up on the wrong side of the bed!”
—Pianta, Super Mario Sunshine 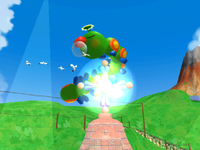 Wiggler asleep on top of the Shine Tower

Wiggler,[1] also known as Boss Hana,[2] is a giant green Wiggler who appears in Super Mario Sunshine as the boss of Gelato Beach. It sleeps on top of the glass case housing the Sand Bird egg, blocking sunlight and delaying its hatching. Unlike other Wigglers, it does not change color when it is angry.

Wiggler appears in two missions in Gelato Beach: Mirror Madness! Tilt, Slam, Bam! and Wiggler Ahoy! Full Steam Ahead! In the first mission where Wiggler appears, Mario has to correctly angle three mirrors, to hasten the hatching of the Sand Bird, by removing the Plungelos found on the mirrors. Once all three mirrors are correctly angled, Wiggler falls off the case, revealing a Shine Sprite. In the second mission, Mario has to fight an enraged Wiggler. It moves very quickly and can damage Mario by running into him. Mario can stun it by spraying Dune Buds with water when Wiggler approaches them, flipping it onto its back, revealing a weak point on any one of its segments, which needs to be ground-pounded to deal damage to Wiggler. After Wiggler has been hit three times, it turns into sand, revealing another Shine Sprite.

As Mario fights Wiggler, it blows steam from its nose and makes sounds like a steam locomotive.

The Wiggler Wagons in Mario Kart: Double Dash!! found in Mushroom Bridge and Mushroom City bear resemblance to this Wiggler.