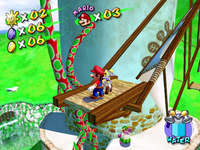 “I came here to tour the Big Windmill...and I've got to say, it's spectacular!”
—Pianta, Super Mario Sunshine