“And now, we shall race to that flag!”
—Il Piantissimo, Super Mario Sunshine

Il Piantissimo is a human disguised as a Pianta that Mario must footrace for three Shine Sprites in Super Mario Sunshine. He takes the role of Koopa the Quick from Super Mario 64.

Il Piantissimo is very confident and considers himself superior to others. Various locals at Pianta Village regard him as a rogue, a creep, and not related to the Piantas.

Il Piantissimo's name is likely a portmanteau of Pianta and Italian -issimo ("-est", "very"), or specifically pianissimo ("very soft"), a dynamic marking in sheet music. The word il is an Italian definite article, equivalent to "the". 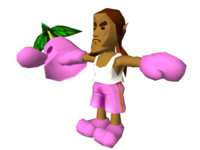 Il Piantissimo without his mask.