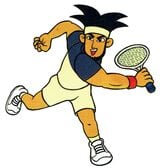 Harry (Japanese: ハリー Harī) is an unlockable character in the Game Boy Color version of Mario Tennis. He is a large, well-built senior player who acts as Alex's doubles partner, and can be transferred into Mario Tennis for the Nintendo 64. Harry wears a white tennis shirt and shorts and has brown spiky hair.

In Mario Tennis: Power Tour, Harry is a coach at the Academy. He and Kate have a friendly rivalry of sorts (emphasis on the friendly), frequently resulting in trouble for anyone nearby. The player can see his name on a trophy for winning the Island Open doubles with Alex; in addition, he is implied to be the second-in-command coach under Alex. After completing Wall Practice, Harry will show up to congratulate the player, but briefly forget that he's a coach and acts like a rival player until Kate gives him a reminder.