“Why, son of a gun! My boy, I believe that's the bulb filament I was searching for! Good job, Mario, this invention is the light of my life!”
—Thomas Edison, Mario's Time Machine

Thomas Alva Edison (February 11, 1847 – October 18, 1931) was an American inventor and businessman who held over 1,000 patents, notably one for the incandescent light bulb that became the foundation for modern light bulbs. Known as the "Wizard of Menlo Park" after inventing the seemingly-magical phonograph, he experimented endlessly in his laboratory. His work on the incandescent light bulb involved testing numerous Filaments before settling on one made of carbonized bamboo; however, in Mario's Time Machine, Bowser steals the filament before Edison can use it for testing by traveling back in time. Mario then travels back in time himself to return the filament, and meets Edison in the process.

Thomas Edison was born in Milan, Ohio on February 11, 1847. He worked early on as a telegraph operator, and after finding success with various inventions (including the phonograph), he created a research lab in Menlo Park dedicated to technological innovations. In 1878, Edison was inspired by similar innovations in Europe to start experimenting on a light bulb of his own with his team. After running through hundreds of potential filaments, he settled on a carbonized bamboo filament that could last over 1,200 hours. In collaboration with other inventors and engineers, Edison also created, improved upon, or was granted patents for the Kinetoscope, the fluoroscope, the carbon microphone, and much more. 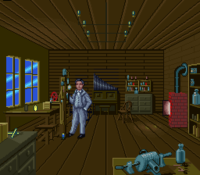 Thomas Edison in the SNES release of Mario's Time Machine

According to Mario's Time Machine, Thomas Edison was toiling away in his laboratory in Menlo Park, waiting for his bamboo filament to arrive. Mario later arrives in the area, looking for the recipient of the filament in his possession. As he does not know who Thomas Edison is, nor that he is looking for the filament, he must first talk to the other inhabitants of Menlo Park. If Mario attempts to approach Edison sooner, Edison largely ignores him, as he is too focused on his newest invention. Once Mario finally learns of Edison, he quickly gives it to him, and Edison's inventions soon come to life. Mario asks him where his inspiration comes from, and Edison delightedly responds that he knows that he is on the right track whenever he sees a lightbulb light up in his head.