This article is about the character in the WarioWare games. For the enemy in Hotel Mario, see Penny (enemy). For the item in Mario's Time Machine, see Penny (item).

“To all Diamond City residents! We are now hiring experiment subjects! Experiments are guaranteed to be 100% not-entirely-lethal.”
—Penny, WarioWare: Smooth Moves

Penny Crygor, most commonly just known as Penny, is Dr. Crygor's granddaughter. Her first appearance is in WarioWare: Smooth Moves. She admires her grandfather and wants to grow up to be a great chemist and scientist, though she also desires to become a famous singer.[2] She attends Diamond Academy. 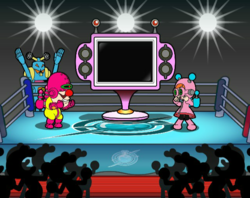 In WarioWare: Smooth Moves, Penny enters a competition called the "Invent-Off" at the Diamond Academy and is put against her grandfather to see who is the best inventor. After what appears to be a mental fight between the two, Penny pulls out her winning invention (a motorcycle) out of thin air, which knocks Dr. Crygor down. Penny then takes one of Mike's head-mounted microphones and decided to sing a song to the cheering crowd.

Later, Penny sends her motorcycle to Wario. Wario is then sucked inside the motorcycle while using it and is turned into Tiny Wario.

The Japanese Smooth Moves website features a blog section for the WarioWare developers. In her blog entry, Penny posts a photo of her going to the beach with Dr. Crygor and states she loves her grandfather dearly despite his reputation as a "creep" and a "weirdo". In the comments, Penny responds to a comment left by Ashley explaining her bodysuit was created by her grandfather and can adjust itself to any temperature. 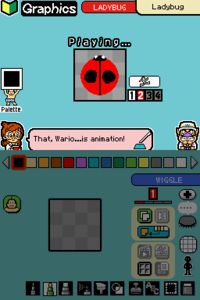 In WarioWare: D.I.Y., Penny helps the player and Wario create microgames. As such, she leads the game's tutorials. During the tutorial, she is paired up with Wario who serves as her student as well as the player. She frequently makes sarcastic quips toward Wario's intelligence and patience, though she is quick to apologize when Wario gets offended.

In Game & Wario, Penny appears as the host of the multiplayer minigame Fruit, where she gives tips to the "agent" player and reacts to set pieces (such as reactivating the lights when they are turned off).

Like most of the other WarioWare developers, Penny is in the Bowling minigame depicted as a pin.

As with the other WarioWare characters, Penny makes an appearance in Miiverse Sketch Masterpiece Collection, a series of videos showcasing pictures of often questionable quality made in the game's Miiverse Sketch mode. Penny's video is themed after drawings of Prince Shōtoku, an important ruler in Japanese history.

With Wario asking for her assistance, Penny appears as the final host of the Twist League in WarioWare Gold. In her story, she develops a potion she calls the Tonally Transformative Elixir, which she hopes will give her the voice she needs to become a "mega pop star". She uses Dr. Crygor as a test subject, but all that occurs is a slight increase in pitch in his voice and a major stomachache. She then makes an elixir to combat the stomachache, which succeeds, but it is implied the effects of the Tonally Transformative Elixir will not wear off any time soon. Later, during the Dancing Team set of the Ultra League, she arrives with Mona, Jimmy T, Mike, Fronk, Young Cricket, Master Mantis, Kat, Ana, and Dr. Crygor to assist Joe in filling up his new nightclub, Club Joe. After Dr. Crygor and Master Mantis, albeit unintentionally, drive off almost everyone in the club with their dance moves, Penny decides that the thing that draws people in is music, and proceeds to sing very angelically, which almost instantly fills the nightclub up. She later joins in the party, no doubt continuing to sing. At the very end, she along with all of Wario's friends split the money Wario gained from the Wario Bowl tournament, much to Wario's dismay. 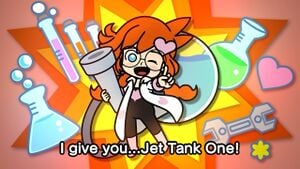 Penny unveiling the Jet Tank One.

Penny appears in WarioWare: Get It Together!, though she does not appear in Story mode until after defeating the Wario Bug. After obtaining the Golden Beehive, Golden Toilet Paper Roll, and the Golden Holey Mug, Wario and his crew find a note from the brown monster daring them to combine the three items. When Dr. Crygor cannot think of how to do so, he decides to call Penny for help.

Meanwhile, back in Diamond City, Penny had just finished the Jet Tank One in her lab and gives it a test run when she receives the call from Crygor. She quickly flies to WarioWare, Inc. using the water blaster and enters the game. Inside the game, she boards a pink helicopter and flies to Wario's crew. She soon combines the three items into a Golden Watering Can. After she fills the Golden Watering Can with water, it floats towards a nearby toilet and waters it, causing a massive beanstalk to grow from the toilet hole. Penny suggests climbing it, believing that there must be something at the top.

As a playable character, Penny uses her Jet Tank One. Tilting

in a direction makes Penny spray water toward that direction, with the recoil of the water blaster pushing her the opposite direction. Pressing

allows her to hover in midair, which negates the recoil of the water blaster, and pressing

again cancels the hover, allowing her to move again. The ability to fire projectiles quickly (at a rate even surpassing those of traditional projectile-based characters) allows her to easily clear microgames where many objects must be cleared out in a small amount of time (e.g. Shadow Sports, Witch! Which?). Her water is also effective in pushing or spinning objects (e.g. Gondola Lift, Weird Windmill). Penny can also uniquely affect microgames that involve water, fire, and heat (e.g. Sanitation Station, Hot Hoops, Foggy Glasses). However, there are some disadvantages: because the water projectiles have active hitboxes, inadvertent use of her ability may cause her to lose the microgame with the water possibly contacting undesired objects (e.g. Rock Candy, Fishy Felines), which may even render the microgame impossible to win (Balance the Scales and Pop Goes the Party). Penny herself is also comparably slower than flying characters, and is insufficient in quickly applying constant pressure to objects (e.g. Blow Your Horn). Due to her inverted movement, games that require her to move to a precise location are also a bad fit (e.g. Take a Seat), as she is more difficult to control. Overall, Penny has microgames evenly distributed to each suitability level (18 bad, 50 below-average, 53 average, 51 above-average, and 40 good).

Penny makes a cameo in the advertising half of Episode 50 of the manga Dr. Mario-kun, in the page dedicated to WarioWare: Smooth Moves. In the strip, Penny walks into Wario's office and asks him how the playtest for the "Dr. Mario RPG" went, only to be surprised by Wario's tantrum as he destroys the entire office due to his frustration with the game's buggy state.

Penny's appearance in the Wario... Where? set

Penny makes a cameo appearance in the Wario... Where? challenge set of Rhythm Heaven Megamix. She and Dr. Crygor appear in the background during the set's version of Fillbots, which now features Mike as one of the models of robots being filled with liquid. 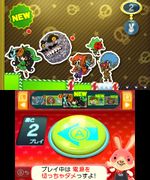 Penny as the Happy Mask Salesman

As with most of the series cast, Penny is featured as one of the collectables in the WarioWare set of Nintendo Badge Arcade.

Penny is also featured in a set of badges parodying The Legend of Zelda: Majora's Mask. The set has Penny dressed as the Happy Mask Salesman.

Penny is a young girl with red-orange hair and fair skin. Her hairstyle consists of two long braids with two long locks on the top with a bang swept to the right and a heart hairclip at the left, rosy cheeks, and she wears round glasses.

In WarioWare: Smooth Moves, she wears a fully zipped pink cloak-like lab coat with a collar and a red trim at the bottom with slightly puffy sleeves, black baggy pants, and pink boots. She also has brown eyes.

As of WarioWare: D.I.Y. and Game & Wario, she wears a black bodysuit with a pink heart at the chest, a white lab coat with two large heart-shaped pockets and rolled up sleeves revealing pink cuffs, alongside pink gloves and retains her pink boots.

In WarioWare Gold, her appearance remains the same with a few differences. Her eyes are now blue, her bang is thicker, the heart-shaped pockets on her lab coat are pink, her heart hair clip is bigger, she does not retain her gloves, and the pink color of her outfit is lighter. In a fantasy, she wears a pink short-sleeved dress with a long magenta bowtie with a matching pair of magenta headsets with pink stars and pink flats. As seen in a commercial, she wears a red nightgown with a pink heart on it along with her hair down when she goes to sleep.

Penny: Actually, it's a present-dropping game!
Wario: Yeah, yeah. Same thing.
Penny: But... But they're not, really... -WarioWare: D.I.Y.

WarioWare: Get It Together! character description[edit]