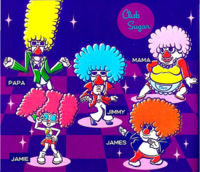 All the members of the family dancing at Club Sugar.

“Yo, my family knows how to burn up the dance floor!”
—Jimmy T., WarioWare: Touched!

Jimmy's Folks are the family of Jimmy T who live in Diamond City and appear in the WarioWare series of games. They enjoy dancing, and have done choreographed dances together. All members of the family also have large colorful afros, red noses, and sunglasses.

In WarioWare: Twisted!, Papa and Mama dance with Jimmy at Club Sugar. They later take their phones out and take pictures of him while ignoring their dinner. Sugar closes the club while the three are still inside. Later, Mama and Papa host the Family Scramble microgame set, which features microgames from Mona, Jimmy T., Kat, and Ana.

Mama and Papa make an appearance on the cover for Jimmy's Night.

In WarioWare: Touched!, Jimmy first invites Papa and Mama onto Club Sugar's dance floor. He then calls Jamie and James to do the same. Once they all get onto the dance floor, they dance together. When Scratchy the 'Fro Bug lands in Jimmy's afro and causes him to itch wildly, they continue dancing and think he is still dancing. They finish their dance routine by taking out their cell phones. During gameplay, the family gathers around Jimmy and looks at his cell phone. If the player successfully completes a microgame, they all laugh. Failing a microgame causes the family to grimace. At the end of Jimmy's story, the family walks away from Club Sugar.

While they do not reappear in the game itself, they all have a brief cameo in Jimmy T's character trailer for WarioWare Gold.

While they do not reappear physically in WarioWare: Get It Together!, the family has a cameo in one of the photos of Jimmy T's Gallery.

Jimmy T's stylin' sibs, as if you couldn't tell. Disco diva Jamie gets the whole joint shakin' with her exclusive remixes. Self-proclaimed "chick magnet" Jimmy[sic] lays down a funky groove of choice microgames.