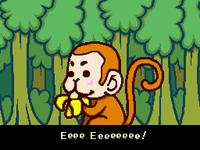 Numchuck the Monkey eating a banana in WarioWare: Touched!.

Numchuck the Monkey is a monkey that appears in WarioWare: Touched!. It appears in Kat & Ana's story. Numchuck's name is based on "nunchaku" (also known as "nun chucks"), a Japanese weapon.

Ana decides to eat bananas one day, but she finds them missing. Panicking, she frantically searches everywhere, unknowing that Numchuck had stolen it. She then determines that a thief had stolen it, so she and her dog Shadow decide to put the thief to justice. Shadow finds a banana peel and some footprints belonging to Numchuck leading outside. Before following them Ana writes a note to her sister Kat and takes off. Later Kat and Shuriken the Falcon give chase to the thief. Eventually they find the monkey thief, but instead of retaliating against it they are overwhelmed by its cuteness. Afterwards they befriend it and name it Numchuck, and the thievery was forgotten.

Numchuck also makes a cameo in WarioWare: D.I.Y. as one of the instruments to make records with.