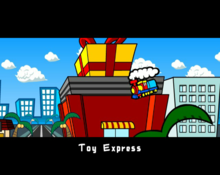 Toy Express is a store seen in the WarioWare series. It is located on Interstate 301 in Diamond City.

An unnamed predecessor to Toy Express appears twice in WarioWare, Inc.: Mega Microgame$!. At the beginning of the game, a toy store can be seen in the background while Ken the Reporter, who is holding a copy of Pyoro, reports on the game's success. This report prompts Wario to release his own game, thus starting the events of the WarioWare series. The store can also be seen in the ending cutscene, with Ken reporting on Wario's new game. 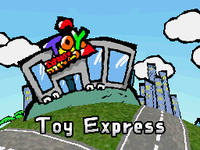 In WarioWare: Touched!, Toy Express is featured in 9-Volt's story. At the beginning of the episode, a large crowd can be outside of the store for the release of the Nintendo GameCube game 36-Volt Man. The scene then cuts to 9-Volt and his friend 18-Volt in front of the store with a copy of the game. The duo then head to 9-Volt's House to play the newly-acquired game. 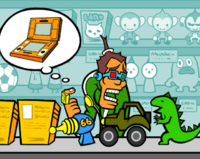 18-Volt inside the store in WarioWare: Smooth Moves, looking for a Game & Watch.

In WarioWare: Smooth Moves, 18-Volt heads to Toy Express to look for a replacement Game & Watch after he accidentally broke 9-Volt's, but has no luck after looking through the aisles. This is notably the first and only time the inside of the shop is seen. Upon heading outside, he notices a smaller video game store and heads there in hopes of finding what he needs.

Toy Express reappears in Game & Wario. Late in the game, after beating the game Pirates, Reporter John is seen reporting live at Toy Express, explaining that the game is a hit. A line of customers are seen waiting in front of the store, and a group of fans dressed in pirate costumes also appear.