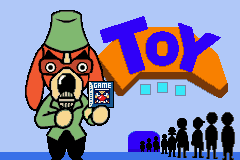 Ken the Reporter in the Wario's ending of WarioWare, Inc.: Mega Microgame$!.

Ken the Reporter (also referred to as Anchorman Ken in WarioWare: Twisted!'s credits, and Ken the VJ in the credits of WarioWare: Touched!) is a recurring character from the WarioWare series. He is a humanoid dog, and his name, Ken (犬) is a word that means dog in Japanese. In Game & Wario, his role is replaced by Reporter John.

Ken the Reporter on Wario's television

Ken the Reporter first appears in WarioWare, Inc.: Mega Microgame$!. At the start of the game, he appears on a newsflash telling how video games sales are increasing, inspiring Wario to create his own games. He appears on Wario's television in the first intermission of Wario's first story. He later appears at the end of 9-Volt's level, announcing that the Game Boy Advance SP is available for purchase. He finally appears at the end of the game, broadcasting Wario's success via television. 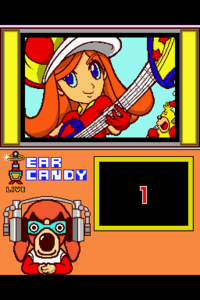 Ken the VJ as the host of the show Ear Candy in WarioWare: Touched!

Ken the VJ reappears in WarioWare: Touched!. During Mona's story, he acts as the host of the radio show Ear Candy. On the show, he reports the top five music artists of the week. He also reports that Mona, who received the number one spot on the top five, will be playing at the Hawt House. The role of a news-reporting dog is replaced by Rocky the Reporter in this game. 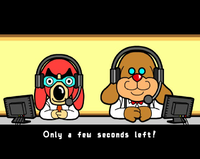 Ken and Joe commentating over the game

Ken the Reporter, using his original name again, reappears in WarioWare: Smooth Moves. He appears at the end of Mona's story, where he is reporting on a football game between the Diamond City Roughs and The Dinosaurs alongside Manager Joe. He asks if the Diamond City Roughs will turn the game's results around. He then adds commentary when the team wins the game.

While Ken the Reporter does not appear in WarioWare Gold, being replaced by Ben, Ben's Rank A character card mentions that he follows in Ken the Reporter's footsteps, and that they, alongside Reporter John, sometimes have lunch together.