Shadow the Dog, originally known as Paw the Dog, is a recurring character in the WarioWare series. He is Kat & Ana's dog and lives with them in Diamond City. He has the magic ability to transform into a giant sword which can be used by the ninja sisters. His first appearance took place in WarioWare, Inc.: Mega Microgame$! where he assisted Kat.

In WarioWare, Inc.: Mega Microgame$!, Paw lives with Kat at an unknown place far from Diamond City. After receiving a letter from Ana dropped by Don the Sparrow, Kat and Paw travel to the Castle to defeat Boneheads. On their way, they travel across various Japanese landscapes.

After Kat initially fails to defeat Boneheads with her katana, Shadow jumps onto the roof and transforms into a giant sword. With this sword, Kat defeats Boneheads by slicing him into pieces. Near the end of the epilogue, Shadow can be seen chasing Don.

In WarioWare, Inc.: Mega Party Game$!, artwork of Shadow can be seen in the explanation screens for Kat & Ana's multiplayer game Wobbly Bobbly.

In WarioWare: Twisted!, Shadow accompanies Shuriken the Falcon, Kat, and Ana during a field trip to the Diamond Knoll. During gameplay, Shadow holds a sign indicating the number of microgames a player has played through.

Before Kat & Ana defeat the Diamond Troll, Shadow and Shuriken crash into the cabin, hit the roof, and fall on top of it. This knocks out the Diamond Troll and allows them to leave. However, a swarm of bees that Kat angered waits outside the cabin and chases them. Shuriken also carries Shadow as the four approach Club Sugar. 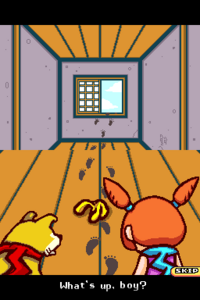 In WarioWare: Touched!, Shadow is with Ana in Kat & Ana's House. While Ana looks for her missing bananas, Shadows spots a banana peel and a trail of footprints and alerts her. After leaving a note for Kat, the two run off to chase the thief. Shadow can be seen in the epilogue next to Ana after she and Kat takes the thief, who is a monkey, and names it Numchuck.

During the intermission in Kat & Ana's stage after the player beats the boss game, Ana throws a stick which Shadow has to retrieve. However, she accidentally hits Kat who angrily runs after her.

Shadow in the character trailer

While not reappearing in the game itself, Shadow has a quick cameo in Kat and Ana's character trailer for WarioWare Gold.