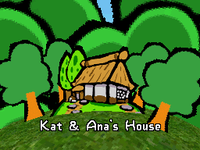 The house from outside.

Kat & Ana's House is a house in Diamond City. It is seen in WarioWare: Touched!. It is located in a forest. In the game, it is briefly shown both outside and inside, revealing that it resembles a traditional Japanese house. In the game, Numchuck the Monkey steals bananas from a dish in a room and escapes through a window, then eats them on the roof and runs away into the forest. Returning home, Ana finds the bananas missing and searches the room while Shadow the Dog notices the footprints of the monkey which look like a human's. After leaving Kat a note, Ana dashes out the door to chase after the culprit.