WarioWare: Touched! is a Nintendo DS game and the fourth game in the WarioWare series. The game contains microgames that are based on touching the touch screen with the stylus. There are several characters in the game and each one has a style of microgames, a concept introduced in its predecessor, WarioWare: Twisted! New major characters, Ashley & Red and Mike, are introduced in this game. In addition, the game includes many "mix characters" - characters whose games are taken from normal characters. Besides the microgames, the game also includes special souvenirs, similar to its predecessor, won by achieving certain tasks (like scoring a certain amount of points in a specific game). Like WarioWare, Inc.: Mega Microgame$!, WarioWare, Inc.: Mega Party Game$!, and WarioWare: Twisted!, the music and sound effects are taken from Wario Land 4.

The game was released on December 2, 2004 in Japan. In North America and Australia, it was released before WarioWare: Twisted! and with Europe not getting WarioWare: Twisted!, in terms of chronological release dates specifically to these regions, it is the third game in the WarioWare series. The game was re-released as a Wii U Virtual Console title in North American, Japanese, Europe, and Australia in April 2015. My Nintendo members were able to redeem the game as a Nintendo 3DS-exclusive DSiWare download for 1,000 Platinum Points from March until July 2016.[1] The DSiWare version is currently unavailable, with no indication whether it will be re-introduced via My Nintendo at another point in time. 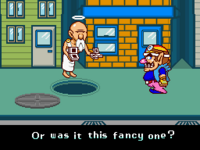 The Sewer Guru asks Wario what system he dropped.

Wario is walking down a street after having proudly stolen a Game Boy Advance and Game Boy Advance SP, but then he suddenly trips and drops both systems down a manhole. The Sewer Guru then flies up from the hole holding not only the two handheld systems, but also a Nintendo DS, and he asks Wario which one he dropped. Wario replies, "Gimme all of 'em!" and lunges at the Sewer Guru, knocking both of them down the manhole. After a brief scuffle, Wario emerges with the Nintendo DS. Wario immediately notices that the handheld has two screens, but finds it more peculiar that there are no buttons. Not knowing how to play it, Wario loses a Whack-a-Mole minigame and shakes it angrily, thinking that the device does not work. However, the stylus flies out into his hand, and Wario suddenly realizes that he must use it to tap the bottom screen. He wins the minigame and then realizes he could make double the profit out of this double-screened apparatus, and so he uses it to make touch-style microgames. 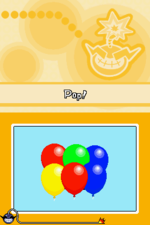 One of the microgames, Party Popper, in action.

WarioWare: Touched! plays very similarly to most games in the WarioWare series: players play a randomized grouping of very small, short minigames (called "microgames") within a small time limit and a very brief set of instructions. Periodically, the game speeds up the microgame, thus shortening the time and making it more challenging and pressuring to complete the microgames within the time limit. Players start with four tries every time they start a stage. If they lose a microgame, they lose a try; when players lose all four of their tries, the game ends and players must start over from the beginning. Players earn points for every microgame that comes (winning or losing the microgame does not factor into points gained); at the fifteenth point, players play a boss microgame, which is considerably longer and more challenging than a typical microgame.

The following characters in WarioWare: Touched! get microgames. Below is a list of the characters and stages. The first set of microgames the player must complete is always Wario's set. As the player completes more stages, more characters appear in the Games menu. Finally, each stage automatically ends after the player completes the boss stage, but subsequent playthroughs of a stage are continuous, with microgames becoming more difficult after completing a boss stage until the player has no more tries. Players can get more tries by completing a boss stage, but the maximum number of tries is always four.

Each character hosts a set of microgames and comes with an individual story dedicated to them. At the end of each story, the respective character meets with the other ones at the Hawt House.

Characters from microgame sets do not introduce any new microgames or any specific touch control, but they mix up microgames from previous employees as described.

Each of the character's stories takes place in various locations in Diamond City.

These are objects that appear in the main story and/or play a role of some sort.

In the European, Wii U Virtual Console, and 3DS versions, Mona Pizza cannot be unlocked, since players must have a copy of WarioWare: Twisted!, which was not released in Europe, and the game reads very specific data from said cartridge in the Game Boy Advance slot on the Nintendo DS to unlock it. However, it is still present in the game's data, and European players can still play the game if it is present in a copied save file of the game. 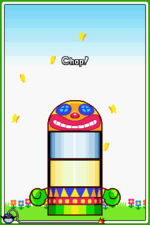 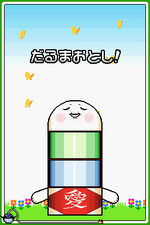 Middle Management, in the international and Japanese versions respectively.

As with most WarioWare games, WarioWare: Touched! has undergone significant localization differences, which vary from different regional versions. Some changes are simple as a name change while others have complete graphical overhauls.

WarioWare: Touched! is developed by Nintendo SPD Group No.1 and Intelligent Systems. As with most WarioWare games, Yoshio Sakamoto alongside Ryoichi Kitanishi produced the game. As the original WarioWare's team was busy on WarioWare: Twisted!, newcomer Ryuichi Nakada was the chief director of Touched!, while Goro Abe, Taku Sugioka, and Teruyuki Hirosawa were the game's other directors. 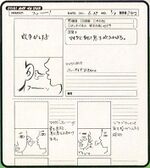 A storyboard of Sweet Nothings, showcasing the template used to create microgame concepts

Around the time WarioWare: Twisted! was in development, the team was presented with the Nintendo DS, who thought the touchscreen and the stylus were a perfect match for developing a WarioWare game.[2] As the series core staff was already busy with WarioWare: Twisted!, the team split, and the game was primarily developed by staff who were new to the series. Producer Yoshio Sakamoto had to scramble to find a director for the project.[3] At the beginning, there was a lack of unified awareness among the new staff to "what made WarioWare funny" and as such, WarioWare: Twisted!'s staff was transferred to WarioWare: Touched! following the completion of the title to help complete the game for the Nintendo DS's launch. The game was developed in a very short time, five months, and was released relatively soon to the release of WarioWare: Twisted![2][4]

WarioWare: Touched! has received generally positive reviews from critics. Aggregate sites Metacritic and GameRankings has given a score of 81 based on reviews of 54 critics and a score of 81.83% from 63 critics respectively.[5][6] As with most WarioWare titles, it is praised for its addictive nature, its quirky and bizarre theme, the replayability and the intuitive use of the touchscreen and other features of the Nintendo DS. The most common criticism is that the game is very short, where it can be fully beaten within a few hours. IGN writer, Craig Harris, has mostly praised the game, who gave the game a score of 8.5 out of ten, but commented that WarioWare: Twisted! is a superior game to WarioWare: Touched! However, he ended by saying, "Wario Ware Touched![sic] may be an incredibly brief experience, but it's still one of the top titles in the Nintendo DS library. At the very least it gives a great insight into gameplay ideas that the touchscreen and dual-screen handheld's capable of, even in these quick and extraordinarily brief five-second shots."[7] Stuart Reddick, from Nintendo Life has given the game a 9/10, who greatly praised the game and commented on "how simplicity can still lead to stunning gameplay." and called it one of the best titles on the Nintendo DS.[8]

The game has received an Editor's Choice award from IGN.[10]

At E3 2004, the game was titled WarioWare, Inc. DS. To start the demo, the player would touch the bottom screen. In the demo, Wario would throw a 3D crate displaying the number of played microgames towards the screen which would open to start a microgame. When the player touched the bottom screen, a cursor would appear at that position. Successfully beating it would cause the crate to shatter and make Wario stomp in anger. In addition, the microgames lacked a time limit. Instead, there was a 20 second time limit that activated during microgames and displayed "TIME UP!" on the bottom screen once it finished. The crate would then fly back and hit Wario, causing a Game Over.[11][12][13] In the demo, Steel Chef required players to cut 6 objects. Write On, Dude's command was "Write that symbol!", Greedy Hands' command was "Gather!", and Quite Puzzled command was "Arrange!". In a promotional video of gameplay, the text was spaced out much further and the microgames shared the same music and sound effect.[14] In an early English translation, Chalk Full's command was misspelled as "Earse it!", Pet Petter's command was "Pet it!", Shakedown's command was "Shake 'em!", Impressionism's command was "Rub the paper!", and Oh, Snap!'s command was "Tickle the armpit!"[15]

An unused placeholder character sheet can be found in the game's data, most likely serving as a template for the overworld character sprites. Some place-holder graphics for souvenirs serve a similar purpose. TEST_BOSS is a microgame used for testing boss microgames. It is simply Quite Puzzled, but with a different name. BREAK_ELEVATOR is an unused intermission scene for elevator characters (the bear characters). It is a blank pink screen for localized versions of the game, but Japanese versions of the game have Japanese text that translates to "Taking a rest! BREAK!".

If the player rapidly pauses the game before Spario begins, Wario's arms and mustache may not appear, rendering the microgame impossible to win.

Three microgames in Kat & Ana's set are impossible to complete on some first-run Japanese DSes. The lines in Bright Idea and The Proud, the Fuse cannot be drawn while the flashlight in Midnight Weirdo blinks on and off.[16] Nintendo provided replacement copies for those affected, and the glitches were corrected for later printings of the game.

The baby from Sugar Rush in Wayward Water