Virtual Boy Wario Land (also shortened as Wario Land), originally titled Wario Cruise[1], is a video game released by Nintendo for the Virtual Boy in 1995. It is the second installment in the Wario Land series, and the follow-up to Wario Land: Super Mario Land 3. It is a side-scrolling platformer that shares several elements from its predecessor, such as hat-based power-ups and collectable treasure which can affect the game's ending. The game also incorporates several new elements that use the Virtual Boy's technology, such as the ability to jump between background and foreground areas, and enemies and obstacles which do the same. The game was well-received on release, and is generally considered by critics to be one of the Virtual Boy's better titles. 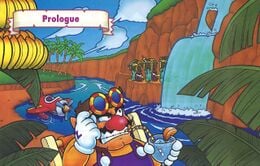 Artwork of the prologue.

I, Wario, have an interesting story to tell. One day during my vacation in the Awazon river basin, I landed my trusty seaplane, Bulldog, and decide to relax in the shadow of the beautiful Aldegara Waterfall. While basking in the sun, I spied some strange creatures with masks entering the waterfall. This piqued my interest!


I hurried over and followed them into the waterfall. Behind the falls there was a large cave, and in the back of the cave ... there was a vault filled with a glorious mountain of treasure!!
Some of the masked creatures jumped me, but I quickly overcame them. "This treasure is all mine now!", I though to myself and rushed in to collect the loot. Suddenly, the floor collapsed and I fell!
I found myself deep within the Earth! I was quite angry and vowed revenge on these creatures, "I will get their treasure!!!"

– Story from the instruction booklet

After progressing through the game's thirteen stages including three boss stages, Wario faces the final boss Demon Head, a large genie which uses its claws and flames to attack. After defeating Demon Head, the ending the player receives depends on what the player collected during the game, how long it took them to complete the title, and the difficulty they played on.

If Wario did not obtain all ten of the stages' treasures, he will sigh with disappointment and leave the cavern with the coins he did acquire. He heads back to his plane, only to find that a family of beavers have vandalized it and leaving Wario stranded in the jungle. Wario chases and grabs one of the beavers, but before he could punish it, the beaver offers an alternative way of flying in exchange for all the coins he found in the cavern. Wario reluctantly agrees and takes his leave while the beaver takes the cash. The ending the player receives under these circumstances varies on the total amount of coins that they collected by the end of the game.

If all ten treasures were collected, Wario will open the vault, receiving a heavy amount of coins along with a magic carpet which flies him home and a magic bottle. Under these circumstances, the ending differs based on the amount of time it took for the player to complete the game, and the difficult in which it was completed. The amount of coins collected have no impact on these endings.

File:VBWL - Underground Artwork.png
Artwork from the instruction manual, showing Wario about to fall into the trapdoor placed in front of the treasure room. The artwork demonstrates how the player gradually climbs their way out of the underground chasm by unlocking elevators, found at the end of stages.

During the game, the player must traverse through fourteen stages, including four boss stages, in order to complete the game. Elevators connect the stages in a linear order - the game's world is continuous, without a stage select, and so the player can only return to previous stages by physically backtracking to them. In order to unlock the elevator at the end of each stage, the player must find a gate key hidden in each stage. In between stages, the player can use coins obtained in the past level in order to play two different minigame, to win either more coins or more hearts. Afterwards, the remaining coins earned are added to the total coins count, and the game is saved.

Out of the game's fourteen stages, four are boss levels and ten are platforming stages. In the platforming stages, the player explores the environment, collecting coins and hearts in order to reach the next elevator. Coins can be used to play minigames, and otherwise affect the ending the player receives without collecting all ten treasures. Hearts give players an extra life if a hundred are collected. Both hearts and coins can be collected in big and small variants, and can be found by defeating enemies, breaking blocks, and throughout the environment. Additionally, diamonds can be found throughout stages, which give an extra life upon contact. Finally, each of the ten platforming stages contain one treasure in a hidden area. Whilst they have no impact individually, if all ten are collected the game's ending is radically changed.

The four boss levels in the game start with the player fighting a guard mini-boss. After defeating it, the player can fight one of the four main bosses. Each of these bosses use the game's foreground and background mechanics during their fights, with the latter two requiring the player to jump between planes in order to defeat them. Defeating bosses rewards the player with a shower of coins and the gate key required to continue.

Wario traversing through one of game's stages

Wario has several moves. By pressing the

, the player can initiate a Jump, which allows Wario to defeat certain enemies by landing on them, clear obstacles, and hit his head against blocks. By holding

and moving, Wario can Barge, moving him forward whilst attacking enemies and hitting blocks. By pressing and holding

, Wario can crawl, allowing him to move under small gaps. In the air, the player can hold

in order to Body Slam, allowing him to hit certain enemies below. When near a knocked-down enemy and certain objects, Wario automatically picks them up - they can be released with

. Finally, at any point the player can hold either

to make Wario run on land and swim faster underwater, and, whilst behind a waterfall, Wario can slowly climb it.

By default, Wario starts in his full-sized form, with most of his capabilities. Upon contact with a harmful obstacle or enemy, the player is reduced to Small Wario. As Small Wario, he loses the ability to Barge or Body Slam, reducing his combat and explorative capabilities, though his smaller size makes it harder for him to get hit. Taking damage as Small Wario or failing to clear a level within twenty minutes will result in a loss of a life, sending Wario back to the beginning of the stage. If Wario loses all his lives, he receives a Game Over and loses all hearts and coins. In a Game Over, one collected treasure will be lost (if any, and the deduction begin from the most recent stage and works backwards). By collecting a Garlic Bottle, the player can return to their normal form.

Wario has four additional forms outside of his small and regular forms. By collecting a Garlic Bottle whilst in the regular form, or by collecting a Viking Helmet in any form, Wario transforms into Bull Wario, making his Body Slam more powerful, giving it the capability of destroying blocks from below, and causing a quake which stuns nearby enemies. By collecting an Eagle Statue, Wario transforms into Eagle Wario, allowing him to fly horizontally. By collecting a Dragon Crystal, he transforms into Sea Dragon Wario, allowing him to spew flames into to defeat enemies and destroy certain blocks. By collecting both a Dragon Crystal and an Eagle Statue, in either order, the player can transform into King Dragon Wario, giving him the abilities of both Eagle Wario and Sea Dragon Wario, with a different flame attack which passes through blocks. All additional forms outside of Bull Wario and Eagle Wario remove his ability to Barge, and getting hit in any form reduces him back to Small Wario.

Levels are filled with blocks, which serve an essential component in a stage's design, both rewarding the player upon destruction and often leading to secret areas. ? Blocks hold objects or items which can be collected or used by Wario. They can only be struck once. Regular blocks are either normal or cracked. Small Wario can only break cracked blocks, regular Wario can break non-cracked blocks after multiple hits, and Bull Wario can instantly break all blocks. Larger blocks can be exclusively broken with Bull Wario, whilst Bonfire Blocks can only be destroyed with flames. Invisible Blocks also appear, needing to be hit before they become visible. Alongside blocks, many aspects of the environment can be destroyed, often yielding items or secret areas, and often only being accessible with one of Wario's non-standard forms.

After the game is beaten once, the best time for completing the game is displaying in the bottom-right corner of the title screen. The save file of a beaten game will have the bat carrying the file's sign replaced with two fairies. Playing the save file again will allow the player to engage in a harder version of a game. This harder version includes a larger amount of Spike Traps in levels, different designs for the ten treasures, and different endings upon completion.

Boss stages (marked with an asterisk below) are marked with a skull symbol on the map screen.

Compared to the other Mario games on the Virtual Boy, Virtual Boy Wario Land was well received.

An early Stage 10 with an unfinished Blade-Face enemy, simply consisting of an unshaded outline.

Virtual Boy Wario Land was first revealed at E3 1995 under the title Wario Cruise. Gameplay demos showed it having unfinished animations, and the elevators at the end of the level originally didn't require a key.[2] Magazines in the months prior to release have published screenshots showing alternate level designs and unfinished enemies.

The original Wario Cruise title appeared on the Virtual Boy's system packaging as an upcoming games promotion, and the title continued to be used in official media up to a month before the game's November 1995 release.[3] Product catalogues have also used the tentative title Wario's Treasure Hunt with a prototype box art.[4]

The staff team involved in the development of Virtual Boy Wario Land was smaller in comparison to other Wario Land games in the series. Hiroji Kiyotake co-directed the game, while Kazumi Totaka developed the music and sound effects. If the player waits at the end screen for 1 minute and 15 seconds after beating the game, Totaka's Song will play.