From the Super Mario Wiki, the Mario encyclopedia
(Redirected from Waterfall)
Jump to navigationJump to search

“Squirtle is one of three Pokémon you can get from Professor Oak in Pokémon Red and Blue. Squirtle was one of the few Water-type Pokémon you could get until you got a Fishing Rod.”
—Tips, Super Smash Bros. Ultimate

Artwork of Squirtle from Pokémon Red Version and Pokémon Green Version can be used as a stamp in Mario Artist: Paint Studio.

In Super Smash Bros. Melee, Squirtle is the first Pokémon to appear on the Poké Floats stage. There is also a Squirtle trophy, obtainable in the Lottery or when it appears at random in the game's single-player modes.

Squirtle is a playable character in Super Smash Bros. Brawl. However, it takes commands from the Pokémon Trainer, who is the real mastermind behind Squirtle's actions. The other two Pokémon used by Pokémon Trainer are Ivysaur and Charizard. When the Pokémon Trainer uses Pokémon Change, his down special move, he returns Squirtle and sends out Ivysaur next, but when used with Charizard, Squirtle is sent out. Squirtle is the lightest of the group, but also attacks the quickest.

Squirtle's special moves are derived from Water-type attacks from the Pokémon series. Its standard special move is Water Gun, in which it charges an attack to spit water at opponents. Its side special is Withdraw, which causes it to charge directly ahead in its shell. Its up special is Waterfall, which causes Squirtle to leap into the air on a stream of water.

Like all Pokémon of the Pokémon Trainer, Squirtle shares the damage meter with the other Pokémon and has a special stamina stat. It is there to regulate the Pokémon changes. When the player changes Pokémon rarely or too often, the stamina of the Pokémon runs low. Squirtle can also wall jump, and has the ability to stick to walls. Finally, Squirtle has a similar type effectiveness to its games of origin, making it take more damage from grass attacks but less from fire attacks. Squirtle is voiced by Michele Knotz, who also does the voice of the Pokémon Trainer.

In the Subspace Emissary, the Pokémon Trainer starts out with only Squirtle. Eventually, he earns Ivysaur and Charizard.

Squirtle returns alongside the Pokémon Trainer, Ivysaur, and Charizard as a playable character in Super Smash Bros. Ultimate, with its appearance updated to match its current design. The stamina mechanic has been removed, so like Ivysaur and Charizard, Squirtle does not tire if in battle for an extended period of time. Pokémon Trainer's type effectiveness mechanic is abolished, which removes Squirtle's weakness to Grass-type attacks (e.g., those that Ivysaur possesses), but eliminates its resistance to Fire-type attacks in the process (e.g., Mario's forward smash). Michele Knotz reprises her role as Squirtle, but with newly-recorded voice clips.

Squirtle has a new down tilt which only hits once, while its forward smash now has it lash out a stream of water. Squirtle's back aerial is repurposed into a multi-hitting attack, while its standard and forward aerials receive alterations. Squirtle benefits from the game's universal changes: its grounded mobility is faster; its aerial attacks have less landing lag; its short hop timing is reduced; it can directionally air dodge; and it can use any grounded attack out of a run, and any of its aerials while on ladders. Squirtle's smash attacks all deal more knockback, while more of its attacks have decreased startup or ending lag. In compensation, its overall damage output is decreased, its aerial mobility is hindered by reduced air speed and air acceleration, and some of its attacks are slower or have less range than before. 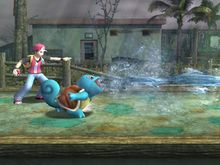 Water Gun is Squirtle's standard special move. Squirtle charges up the move when first used, and when the special attack button is pressed again Squirtle spits a stream of water from its mouth, the distance determined by how long the move was charged. If used right after charging, the move is instead a close-range attack. While charging and spitting in mid-air, players can still move Squirtle, and like most charging attacks the charging can be canceled and stored. 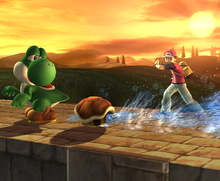 Withdraw is Squirtle's side special move. Squirtle retreats into its shell and charges forward, spinning around and knocking any opponents into the air similar to a Green Shell. While Squirtle cannot be damaged while using the move, it can be jumped on, causing it to fall onto its back for a time and leaving it helpless. The attack can also be ended if the player holds the control stick in the opposite direction. Squirtle's speed can also be adjusted by rapidly tilting the control stick rather than holding it. In Super Smash Bros. Ultimate, Squirtle immediately exits his shell upon hitting an opponent with this move, preventing it from potentially hitting multiple times. 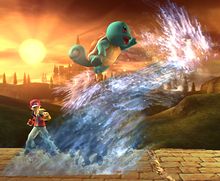 Waterfall is Squirtle's up special move. Squirtle travels into the air at an angle on top of a stream of water that damages any opponents in its path, dealing multiple hits. The direction can be altered using the control stick.

Pokémon Change is the Pokémon Trainer's down special move shared across all three Pokémon. When used, Ivysaur takes Squirtle's place.

Triple Finish is the Pokémon Trainer's Final Smash, in which all three Pokémon join in to attack. During the move, Squirtle uses Hydro Pump.

Squirtle coverage on other NIWA wikis: