“Would you like to see the map? Here you go.”
—Polari, Super Mario Galaxy

Polari is an elderly, blackish-brown Luma who appears in Super Mario Galaxy. Said to be one of the oldest Lumas in existence, Polari serves as Rosalina's most trusted advisor. Having extensive knowledge of the Comet Observatory, Polari serves as a guide of sorts to Mario, showing him a map of all of the galaxies visible from that location.

While Polari's name is never mentioned in-game, and is instead mentioned only in the instruction manual, his name may be derived from "Polaris," also known as the North Star. Polaris was often used by sailors as a guide in navigation, not unlike how Polari advises Rosalina and guides Mario. Conversely, his appearance may be a reference to black dwarfs, which are dead stars.

Polari's first appearance is in Super Mario Galaxy when Mario retrieves the first Grand Star and lands on the Comet Observatory. Polari looks at the beacon with Rosalina and exclaims that "now the poor Lumas may survive". When the player first enters the Terrace they will meet Polari and a Blue Luma that soon transforms into a Pull Star to allow Mario to travel to galaxies. When Mario returns with one Power Star on his belt, Polari will teach him about Star Bits and how Lumas love eating them. Other than that, Polari's main importance within the game is to provide a map of all the galaxies that Mario can visit and their Power Stars and to inform Mario about when the enemy base has been located.

It is unknown what happens to Polari at the end of the game; he is not seen flying into the giant black hole, and in the secret ending, he does not appear alongside Rosalina or in the Comet Observatory at all.

Polari appears in Mario Sports Superstars, where he fulfills the same role he has in Mario Golf: World Tour.

Polari, unlike all other known Lumas, is a blackish brown color and has sky blue eyes. Aside from this unique coloration, he is relatively the same size as all other Lumas, excluding the larger ones like Hungry Lumas, Lumalee and Comet Tico.

Polari shows certain similarities to Toadsworth: both are older members of their respective species, they are highly protective of the person they advise, and they have a coloration that noticeably deviates from the typical color schemes of their respective species. Polari is also shown to be wise, with his knowledge proving useful to Mario on his adventure, such as telling Mario information about the galaxies in each of the domes.

Just like all other Lumas, Polari loves to consume Star Bits, and he may thank the player if they shoot a Star Bit at him. Compared to the Lumas and the joyful sound that they emit when happy or excited (such as when they consume Star Bits), Polari's voice is deeper and he emits a distinctly different sound upon consuming Star Bits. 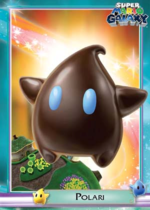