Major Burrows is an abnormally large and pudgy, maroon-colored Undergrunt. He wears a spiked blue helmet that resembles a Spiny Shell, which he also uses to burrow back into the ground. He is also shown to have light blue eyes that are often dilated when his expression changes. He has long white eyebrows similar to Bowser's, and large rounded cheeks. He also has three whiskers on each side of his snout and a big, black nose. He has a large, tannish-colored rounded belly, and a short flesh-colored tail, which serves as Major Burrows's weak spot. Burrows also has long, sharp, black claws that he uses to attack Mario with. When angry, Major Burrows's blue helmet turns red, and his eyes are golden yellow with no visible pupils.

The player faces Major Burrows again during the Daredevil Comet run; this means the player will only have one life point. In the credits, there is a picture of Mario fighting him.

Major Burrows after he is defeated

Major Burrows is the third boss Mario fights in the Boss Blitz Galaxy. His battle is exactly the same as the one from Super Mario Galaxy, although there is no Star Bunny present, and he will release a Launch Star which leads to Bouldergeist's planet instead of a Power Star. 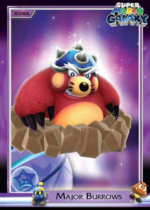 Holy Mole-y! Major Burrows lives on one of the planets in the Gusty Garden Galaxy, and when Mario first sees him, he is trying to munch on a cute Star Rabbit! Force him out from underground with a good ground pound, and strike him three times with a star spin to the tail. After Mario defeats the Major, the thankful Star Bunny rewards him with a Power Star.