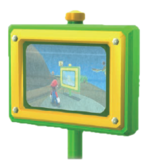 The hint video from the Tip Network at Bowser Jr.'s Fiery Flotilla

“Wanna see how to use the Cloud Flower? I'll show you.”
—TV in the Fluffy Bluff Galaxy

The Tip Network[1] is a channel viewed on TV screens in Super Mario Galaxy 2. The TVs are mounted on a green-and-yellow signboard-like post. They provide helpful tips for the player for upcoming obstacles or challenges that lie ahead. Mario needs to stand in front of a TV to activate it. The Tip Network shows a quick demonstration of how to surpass a difficult part of the galaxy. Unlike the Cosmic Spirit, it does not degrade the Power Star to a Bronze Star. The Tip Network plays a similar role to the hint movies in Peach's Castle in New Super Mario Bros. Wii, except that it does not cost the player anything. If the player plays as Luigi, the TVs do not appear.