The only Gold Chomp in Super Mario Galaxy appears in the Gusty Garden Galaxy, where it plays a prominent role in the mission The Golden Chomp. It contains a Power Star inside, but Mario is unable to break it open without the use of a Rainbow Star, which can be obtained after collecting a series of ? Coins. This power-up allows the player to destroy the Chomp, revealing the Power Star. 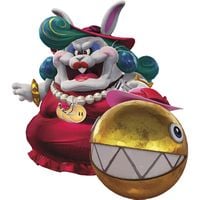 “It sounds to me like someone wants to be a snack for my adorable Chain Chompikins!”
—Madame Broode, Super Mario Odyssey

In Super Mario Odyssey, while Gold Chomps are not normally found in the game as enemies, a golden Big Chain Chomp named Chain Chompikins is owned by Madame Broode. It attacks Mario and Cappy by quickly charging towards them and biting, just like normal Chain Chomps, but the outline used to show where it is going is yellow instead of red. It must be captured by Mario to defeat Madame Broode. It is fought again in the Moon Kingdom, where it has multiple hats instead of one hat, making it take longer to capture it. The method of defeating Madame Broode remains unchanged.