“The most furious itchiness plagues our entire being! It must be stopped! Please find the source at once!”
—Honey Queen, Super Mario Galaxy

Queen Bee first appears in Super Mario Galaxy, where she is a non-playable character. She rules over the Honeyhive Galaxy and helps Mario out in missions there. She first appears in the mission Bee Mario Takes Flight on the Queen Bee Planet where she tells Mario that she is plagued by a terrible itchiness and asks him to stop it. The itchiness is, in reality, caused by five Star Chips that have lodged in the hair on her back. Mario must become Bee Mario with a nearby Bee Mushroom and use his new powers to climb around her back and collect the Star Chips. After collecting all five chips, a Launch Star appears and sends Mario to the final planet and the Power Star.

Also, in the second mission Trouble on the Tower, if the player manages to go to the back of the main planet (where the hollow trunk to the slide is located), a Honeybee tells Mario/Luigi that the queen is having a nice rest.

Queen Bee reappears in the mission Big Bad Bugaboom at the end of the tunnel with three Mandibugs in it. She tells him that the neighbors are giving them trouble again and asks him to stop them, making a Launch Star appear that launches him to Bugaboom's planet. At the end of the game Queen Bee makes a final small appearance in the end-of-game party celebrating Mario's victory over Bowser along with Dino Piranha and a bunch of Goombas and Toads.

Queen Bee as she appears in Super Mario Galaxy 2

In Super Mario Galaxy 2, Queen Bee makes a reappearance in the Honeyhop Galaxy. This time she takes her residence on top of the Queen Bee Planet in the level The Sweetest Silver Stars where she, once again, rules over the Honeybees. When Mario goes onto her planet she tells him that she is plagued by an itchiness and asks him if he could help her out. He, once again, gets a Bee Mushroom and goes on her back to find the cause of the itching to be one of the Silver Stars. After getting all five stars, a Power Star will be formed which he can go get.

While Queen Bee only appears in one galaxy in the game, she is mentioned by several of her Honeybee minions in the Honeybloom Galaxy in the mission Bumble Beginnings where they are searching for a Power Star to bring back to their queen. Once Mario finds the star, they praise him for finding it while they could not.

Queen Bee also appears in the Super Mario-kun manga. Her role is the same as in Super Mario Galaxy, although she is very ill.

Honey Queen makes her first playable appearance in Mario Kart 7, which also marks her handheld game debut as well as her first appearance in the Mario Kart series. In the game, she is an unlockable character and is much smaller than she is in the Super Mario Galaxy installments at roughly the same size as Donkey Kong and Bowser, being able to drive in a regular-sized kart. Honey Queen is a heavy character, and as a result, she receives one of the best speed and weight boosts in the game. To unlock her, the player must win the 150cc Banana Cup. She also has her own battle course, the Honeybee Hive, and a signature kart, the Bumble V. Additionally, her Birthday Girl and Peach Parasol are colored purple, akin to the other female characters (Peach, Daisy, and Rosalina) also using their signature colors for these items. Her emblem consists of a small bee with a crown in the place of its head.

In Super Smash Bros. Ultimate, Honey Queen appears as a master spirit. She runs a Dojo where spirits can learn the "Big-Bee Style", which increases defense, jump, and weight, but decreases offense and move speed.

Honey Queen is a very large bee, over ten times the size of a regular bee, and has a gigantic stinger poking out of the very bottom of her body. On her back she has extremely large wings which reverberate back and forth so quickly they are almost invisible. She has two feet with high heeled shoes on them sticking out of the bottom of her body right above her stinger and two arms with white gloves protruding from her sides. There is always a cape draped over her neck and part of her back which is fastened by a pink jewel right in the middle of her chest. On her head, she wears a brown bonnet which covers her whole head except for her eyes, mouth and nose (the latter of which is purple). She has long eyelashes, black beady eyes with pink eyeshadow, and plump, pink lips. On top of her head, she wears a crown bejeweled with blue gems all around. Whenever she speaks, she does so in the first person plural, a trait commonly associated with royalty. 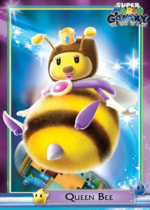 "When Queen Bee has a request, it's hard not to oblige. She's quite comfortable in her home in the Honeyhive Galaxy, except for a persistent itch on her back that she just can't seem to scratch. Mario can help when he "powers up" into Bee Mario and crawls around on her back. In the process of helping Queen Bee, Mario finds five Star Chips, which will create a Launch Star that leads him to a Power Star!"