It has been requested that more images be uploaded for this article. Remove this notice only after the additional image(s) have been added. Specifics: Mario Kart Wii. Some existing screenshots need to be re-taken for better quality and cropped at a uniform size 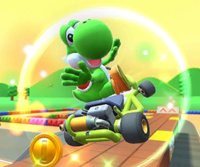 A Jump Boost (also known as a trick[1][2] or stunt) is a technical move that first appeared in Mario Kart Wii. After jumping off most ramps, characters can perform Jump Boosts.

Tricks are introduced in Mario Kart Wii. When executed during jumps caused by small ramps, they cause a short boost after landing. If launching off of Dash Panels, the vehicle flips before the trick, the tricks increase the length of the boost received upon landing and special animations can be seen when pressing Up or Down. Karts flip horizontally (similar to a corkscrew motion) while bikes flip vertically if using the Up or Down controls. Many basic tricks include Mario and Luigi looking backwards and waving or wagging their feet, but more notable tricks include Yoshi sticking out his tongue, King Boo shrinking and laughing, or Donkey Kong's and Funky Kong's one-handed upside down flip.

Tricks reappear in Mario Kart 7, where they are known as jump actions.[3] They can be activated by pressing

while going over a ramp (including a Glide Ramp) or an element of the course that causes the kart to jump. They now are the sole way to obtain a boost, known as Jump Boost,[3] when landing from said jumps. However, characters no longer spin or flip at all when performing one. Unlike Tricks in Mario Kart Wii, Mario Kart 7 has only 2 variations of a stunt per character. Each character in Mario Kart 7 has at least one animation of them facing the screen, while the other animation does not (for Metal Mario's case, however, both of his animations show him not facing the screen, making him the only character with this trait). For example, Luigi has two stunts, the first being an animation of him punching the air, and the second being Luigi flailing his arms about.

In Mario Kart 8 and Mario Kart 8 Deluxe, the trick and Jump Boost mechanics are the same of Mario Kart 7.[2] There is a new sound effect when a character performs a trick. There are a total of nine tricks for each character, three for karts, three for standard bikes and ATVs and three for sport bikes, although all of the sport bikes tricks, despite their slightly different coding, end up being the same ones performed on standard bikes and ATVs, with the exception of the tricks of Peach, Larry Koopa, and Baby Daisy, who have a trick which is different when performed on a sport bike. Two of the three trick types have no special requirements, though the second type is always used as a glider pad trick. The third type is only seen at anti-gravity segments where the player can spin or flip their vehicle when performing a trick. When tricking, how karts/bikes/ATVs spin/flip can also be controlled by which button from the +Control Pad is pressed, or which way the Wii Remote/Wii U GamePad is tilted. 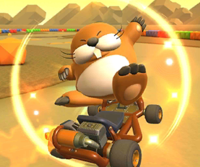 Additionally, nearly every course within the game gains a Trick and Reverse/Trick variant where players can rapidly rack up combos from executing several Jump Boosts. There are also tours entirely based on tricks, aptly named the Trick Tour, where all the courses within that tour are R/T variants of several courses. Though not named as such, the 2020 Mario vs. Luigi Tour, the Toad vs. Toadette Tour, and the 2023 New Year's Tour (aside from included battle courses) also follow this very concept. Coincidentally, the Builder characters all have mostly Trick and Reverse/Trick variants as their favored and favorite courses.

There is a bonus challenge in the game known as Do Jump Boosts, which, as the name indicates, requires the player to perform Jump Boosts. In these challenges, many additional ramps are added.

The following karts increase the boosting time and points from Jump Boosts.

Note: when a trick on sport bikes is the same, or similar to the corresponding trick on standard bikes and ATVs, only one trick is shown.