The Booster Seat (known as the Baby Booster in the British English version) is a small-sized Handling-type kart that appears in Mario Kart Wii. The kart is a baby stroller with an engine and two exhaust pipes in the back, a pair of headlamps on the front of the vehicle, and a roof that opens when the character performs a trick or tosses items. The character's emblem is located on the front and the back of the cab. It has higher pitched sounds than the Standard Kart thus hinting it is a two stroke. The engine is the gray block underneath the body.

This kart is one of the seven vehicles that go through a design change as well as a color change, the others being the Bit Bike, Wario Bike, Flame Runner, Shooting Star, Spear and Phantom. In this case, Baby Mario and Baby Luigi's Booster Seats lack frills on their roofs and Koopa Troopa and Dry Bones' Booster Seats have a bird's eye view of their shells on their hub-caps. Of the seven vehicles, it is the only one to be a kart as opposed to a bike.

Its bike counterpart is the Bit Bike. This and the Bit Bike are the only vehicles in the game to have a speed stat of less than thirty.

The Booster Seat has the best handling among all karts in the game. It also has high acceleration, off-road, and Mini-Turbo stats. Its drift is about average. However, the kart is the second lightest kart in the game behind the Cheep Charger and is the slowest kart in the game. It is overall the second slowest vehicle in the game, only being faster than its bike counterpart, the Bit Bike. The Booster Seat also features the same weight as the Jet Bubble, the same drift stat as the Sprinter, and the same mini-turbo stat as the Wild Wing and the Shooting Star. 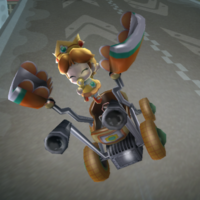 "A baby buggy on the race track!? Starting 'em young! The Booster Seat definitely belongs in the Lightweight category. Expect strong stats in Acceleration and Handling with lower numbers in Speed and Weight categories."