Not to be confused with Koopa Capers.

Koopa Cape is the second racecourse of the Star Cup in Mario Kart Wii. The course takes place on an isle of sort, where racers begin the race near to a cliff. The isle in this course also contains a river cutting through a forest and an underwater tunnel for racers to dive into, with a Warp Pipe at both ends. This course is owned by Koopa Troopa, as signs of him and the name of the course itself reveal. Koopa Cape returns in Mario Kart 7 as the first course of the Lightning Cup and in Mario Kart Tour, debuting in the May 2022 Peach vs. Bowser Tour.

The cliff area at the start of the track

The player first starts out on a cliff. To the right side is a place where the player can fall off into the water, while the left side runs against a cliff wall. The player proceeds to a Kanaami Road ramp with two Dash Panels plus a row of floating Item Boxes. After driving off the ramp, the player lands on a bigger cliff with some wooden ramps and Goombas, with a patch of grass that allows for a shortcut. Then, drivers go into a forest filled with trees and Green Shell-like stones, with a brook serving as the main road (though there are stretches of asphalt and gravel off to the sides). On the very right is a Blue Shell tunnel with Item Boxes inside of it. Koopa Troopa and Koopa Paratroopa billboards can be seen along turns in the brook section of the course, holding a flag and using New Super Mario Bros. artwork, respectively. The river speeds up the player and there are some Item Boxes that go with the current of the river. After the first turn left is a small split path around a rock formation. One side features a ramp that allows the player to perform a Trick, while the other is positioned by another offroad shortcut. The player then turns around a buried Red Shell before the river dives off the cliff as a waterfall into an underwater tunnel.

Inside the tunnel, some aquatic creatures such as Unagi and Cheep Cheeps can be seen, while the players must dodge certain obstacles such as Koopa Zappers which briefly shrink drivers that hit them. The tunnel starts out straight before turning to the left, where another stream of water similar to the brook begins. It goes straight until a U-turn to the right, where more Koopa Zappers appear. After the river ends, there is a ramp directly after a row of Item Boxes and out of the tunnel via a large pipe. The player comes back to the cliff area. There is a turn right after this. Two paths can be taken, but one is covered by a waterfall which pushes the player into the water. A half-pipe is to the left of this curve on the normal route. After the curve, the player reaches the road to the finish line.

According to tiny advertising signs on the island, Koopa Cape seems to be located on an island known as Shell Island. In Mario Kart Wii, Koopa's face at the start of the small cave is replaced by a Mii's face if there is a Mii in the race, and the body is also changed to be a diver outfit.

The music for Koopa Cape has four variants. The cliff part of the course has a tropical sound, the brook part has a country-styled remix, and the submerged glass tunnel part is ambient-sounding. A wub is played alongside the cliff and brook parts.

Koopa Cape returns in Mario Kart 7 as the first course of the Lightning Cup. Most of the course remains unchanged. However, there has been an added wall on the right at the starting line. The ramp into the brook has become a Glide Ramp. The most significant change is that the underwater glass tunnel has had its top removed and the player can now drive underwater in it. Cheep Cheeps now serve as obstacles in this area, replacing the Koopa Zappers. The "Turn Left" sign does not have a flag in the Koopa's hand, as it uses its New Super Mario Bros. artwork instead. The sign at the beginning of the track now says Lightning Cup instead of Star Cup, due to the course being in the Lightning Cup, and the large Koopa Shell in the background has also been removed. The brook section now uses the first variant of the course's theme, as the second variant has been removed.

When playing either locally or online, the Cheep Cheeps and the Unagi in the tunnel are absent. 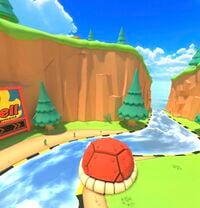 Koopa Cape returns in Mario Kart Tour starting in the May 2022 Peach vs. Bowser Tour. The track overall has a more mountainous appearance, with the cliff sides being taller. The starting banner's design has been changed, now being a large, red metal sign with the modern Mario Kart logo and a Green Shell on top of it that bounces back and forth. The starting banner is also supported by two Warp Pipes. Both the large green Koopa Shell in the background and the half-pipes from the original Mario Kart Wii version of the course have been re-added, whilst the Koopa Troopa head at the entrance to the cave has been removed. The cup sign has been removed due to the track appearing in different cups. The "Turn Left" sign has been replaced with a Sunshine Parts advertisement, while the "Turn Right" sign has been replaced with a Red Shell Strike Equipment advertisement. The waterfall that leads into the underwater segment now acts as a vertical, physical section of the track that racers can drive and drift on.[2] An additional half-pipe was implemented in the underwater section, allowing racers to jump out of the water. The water currents are noticeably weaker in this version of the track, likely to accommodate the controls of the game and the reverse version of the course - which adds hot-air balloons. The Maw-Rays in the background of the underwater section have been removed, though there are now more plants in the background. The course uses its original music from Mario Kart Wii, but the second variant of the theme for the brook section remains absent like in Mario Kart 7.

As with other courses in the game, Koopa Cape has a reverse variant, a trick variant, and a reverse/trick variant referred to as Koopa Cape R, Koopa Cape T, and Koopa Cape R/T respectively; the reverse and trick variants were introduced alongside the regular version in the May 2022 Peach vs. Bowser Tour, while the reverse/trick variant debuted in the 2023 New Year's Tour. This course is a favorite of Pauline (Party Time), Penguin Toadette, Mario (Golf), Yoshi (Gold Egg), Dr. Peach, Chargin' Chuck, Dr. Bowser, and the Silver and Cat Mii Racing Suits. It is also a favorite of the Dolphin Mii Racing Suit if it reaches level 6, and Daisy (Sailor) if she reaches level 8.