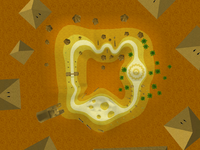 Bird's eye view of the course

The track starts crossing a stone arch where the starting line is located. The course is located in a burning desert containing many Egyptian-themed elements like pyramids, obelisks showing pictures of multiple characters carved in the stone, and large stone statues. Usually, there is a straight path where the finish line is; Dry Dry Desert is no different. After the straight dirt path is a curve to the right. The roads twists moderately with some Pokeys to the left and right. The player may use a Mushroom to cut through the sand in this area, but has to watch out for the collapsed obelisks acting as speed bumps, which may slow the player down if they plan to cut through this area. There is also a large tornado that roams the track in the reverse direction, and can suck up racers into the sky.

After the twisty road is a curve right facing towards an oasis, which splits into two branches. In the center of the fork is a giant sand pit, which lures any racer into the center of it. If the players reaches the bottom, they are eaten by the Pit Plant lying in the center of the pit, similar to straying off course or falling. The fork winds around this circular pit.

After the pit are two statues and a curve right. Two Pokeys are standing next to each other with a Double Item Box occupying in between the two Pokeys. There is a turn right after the two Pokeys and the Item Box, which leads into an enlarged area with many dunes, often with Item Boxes on top of them. One Big Pokey can first be seen and after, two Big Pokeys with Item Boxes directly next to them.

Past this part is a curve right that leads straight, until the course starts again, which is the finish line. More obelisks and a sphinx can be seen in the background while the player is turning right into the straight path that leads into the finish line.

Dry Dry Desert reappears in Mario Kart 8 and Mario Kart 8 Deluxe as the first course of the Banana Cup. The structure serving as the starting banner has been slightly updated, now featuring four flags and only one Mario Kart logo instead of three. The course now features a more slope-like design, and the palm trees and advertisement boards have switched positions. The characters that were carved in stone have been removed. All of the statues, including the Sphinx, have been reworked to resemble Hammer Bros., with the latter sporting a Wiggler headdress. The large open portion of the end of the track has been turned into an oasis allowing players to drive underwater and perform tricks from holes with rising jets (similar to Dolphin Shoals). Because of this, only the Pokeys on the S-turns at the start of the course (which now sport their current design) are present. Falling pillars from Dry Dry Ruins are also seen in this course. The tornado, Pit Plant, and Big Pokeys have been removed (with the Pit Plant being replaced by Lakitu, who pulls the player out of the pit).

Dry Dry Desert also appears on some of the posters for the Galaxy Air sponsor in Sunshine Airport. As well, in Mario Kart 8, this course is one of the eight selectable battle courses.

"With the HD graphics, the sense of a parched bone-dry desert has become even more pronounced than in the last Mario Kart title, and we arranged the music to reflect this. The insistent feel of the melody is meant to represent the ever-lovable Pokeys."