It has been requested that this article be rewritten.

This is a list of glitches in the game Mario Kart: Double Dash!! 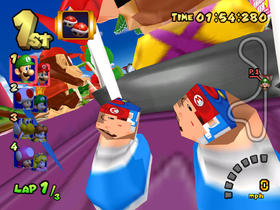 If the player happens to look through Baby Mario, the top of his legs will reveal his texture sheet, which is a result of inappropriate texture mapping. Note that Baby Luigi lacks this. Despite the fact that Baby Mario's model is reused for Mario Kart Wii, the UV errors are not fixed.

This glitch is extremely difficult to execute, though it appears to work in Dry Dry Desert (and may also work on other courses). If the player crosses the finish line just right on their final lap, their kart, during the victory animation, may continue to drive in a straight line in the direction the kart was facing when it finished.[citation needed] Since the player has no control over their kart at this point, their kart will continue in that direction until either the player selects to move on to the next course (or to finish the cup), or until the kart drives out of bounds. After this, the kart returns to normal.

For this glitch, the player must select Rainbow Road and drive the Parade Kart. They should drive to the helix turn with the dash panels. Then, they should slowly drive to the upper ledge to the point where the kart is going to teeter and fall. If this is done correctly, the front half of the kart will slide back down, but the road holds the back half, so only the back half of the kart will be visible. During this time, the back character is doing the teetering animation. It is possible to escape this.

Sent Back to the Start

The programmed command in the game in the case that the players hit the invisible ground is for Lakitu to drop the players off at the start of the course.

Here are some courses where this glitch can occur.

At the first bridge, if the players drive right off at the edge to the right side of the entrance to the cave area at the right position and angle, the characters will not sink and just continue falling at normal fall speed until they hit the invisible ground. When this happens, the players will be sent to the start, but the lap will not count.[2]

There are 2 ways this glitch can occur.

When either one happens, the players will be sent to the start, but the lap will not count.

The conditions for doing the glitch are the same as "Sent Back to the Start". Depending on where the player was before the glitch occurred, the lap may not count. If the player has finished at least half of the lap when this glitch happens, the lap is counted for the game's position system.[4] This causes another glitch where the positions of players do not correctly match how many laps they have completed.

When racers are finishing

When this glitch is activated, it slowly disappears as the players finish, as the game compares the race time of all players. The affected player will slowly fall from 1st to last in the process. A glitch that occurs to a CPU player is noticeable if the human player moved up one place higher at the moment they had crossed the final lap's finish line.

This glitch can also be done in multiplayer mode. When done, this causes another glitch in which the player that is shown as ahead has completed fewer laps than the other player (for example, P1 is 1st at Lap 1/3 and P2 is 2nd at Lap 2/3). This glitch lasts until the player completing more laps either:

When the number of times the glitch has been done is different between players, the positions shown are temporarily incorrect until the race ends. In cases like this, the player who does this glitch the most will be in the lead but will have completed fewer laps. The players who do not do this glitch at all (or have done this glitch the fewest amount of times) will be at or towards last place, but will have completed more laps.

While this glitch does not help the player that is doing it, it can cause the real leader to gain items that wouldn't be possible in 1st place. For example, if everyone but one player did this glitch, the real leader could get a Lightning that would allow the player to easily (although in an unfair way) lap the others. Also, certain items target whoever player is at which position that is declared by the game (in this case, a Spiny Shell will target them and not the real leader unless the real leader is in 1st) rather than the correct position based on laps completed.[6] The real leading player is also likely to collect a Blue Shell when this glitch is occurring, and then fire it without being targeted themselves (because they are not listed as 1st place). In other words, players who have done the glitch the most amount of times are at an unfair disadvantage; those who have done the glitch the fewest amount of times, or not at all, are at an unfair advantage.

This glitch occurs rarely. The racers selected to play sometimes go off the road and eventually get stuck on a wall nearby for indefinite time on the replay and never finishes the race.[citation needed] The other racers are not affected by this and continue the race normally until completing all the laps until one of them is apparently the winner. In spite of this, if the player selects next race on the screen, the order of racers that reached the finish line in the last course gets back to normal.

The top screen shows the glitch. It appears that the Parade Kart could get simply knocked over by the shell, but the Parade Kart is actually facing towards the camera, due to the flipping effects of the explosion.

This glitch only works with the Parade Kart. The player should go to a place where they can get smashed by the course obstacle, such as the Thwomps in Bowser's Castle or the blue dinosaur in Dino Dino Jungle (Bowser's Castle is preferred because the Thwomps are stationary). This glitch best works for two players, as timing is needed. One player should drive underneath a Thwomp, while the other should receive an explosive power-up, either a Spiny Shell or a Bob-omb. When received, the player should fire the item at the correct moment, blasting the kart into the air and getting smashed under the floating Thwomp. After falling down, if done correctly, the player will remain such, which is upside down. Note that the player is invincible in this position and the player can only revert to normal position if Lightning strikes them and a Thwomp afterward.

Skip Half of Bowser's Castle

If Daisy is in the back of the kart and she is hit by a fireball that knocks her into one of the pipes, her "getting burnt" animation will continue until she's hit again or until the battle finishes. 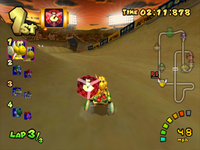 Koopa Troopa and Paratroopa being not shrunk by Lightning.

The glitch is particularly easy to do. The player will have to get hit by something (e.g. a Banana) and hit any other item in the track. If done correctly, it will have no effect.[7] This glitch is caused by damage invincibility that is resulted from getting hit by an item; the damage invincibility protects players from most other item effects, including Lightning, but not explosions from Bob-ombs or Spiny Shells.

This is more noticeable in offline VS. If the karts in first and second place cross the finish line in exactly the same frame, the music for second and third place will sometimes play, instead of the first place music. The two karts must be human players. If this is done in a 2-player offline VS race, there is a chance this will happen if both players receive the "GOAL!" message and the course map at the right disappears (if it does happen, the 2nd-3rd place music would play instead of the 4th-8th place music that would usually play if the player would come last in a LAN Mode VS race[8]).