The Bloom Coach is Princess Daisy's signature kart in Mario Kart: Double Dash!!. It strongly resembles Princess Peach's Heart Coach, but with an orange and yellow paint job, and Daisy's trademark flower on the grille and wheel arches instead of hearts. 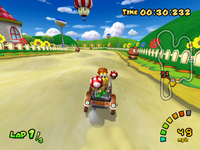 The Bloom Coach in action

The Bloom Coach can be unlocked by completing the Flower Cup on 50cc. It is the lightest middleweight kart in the game, being tied with the weight of the Koopa Dasher and Para-Wing. It is also one of the two middleweight karts that can be pushed around by the lightweight Barrel Train; the other being the Green Fire. However, it has good speed, acceleration, and steering.

In terms of actual stats, the Bloom Coach is tied with the Waluigi Racer for the best acceleration of all the three star acceleration karts. It is also tied with the Turbo Birdo for the best top speed of all the three star speed karts. The Bloom Coach, Heart Coach, Piranha Pipes, and Boo Pipes share the same engine sound, similar to Peach's and Yoshi's karts from Mario Kart 64.

The Bloom Coach appears in Super Smash Bros. Ultimate as a Novice-class support spirit. When in use, it takes up one support slot and equips the fighter with a Fire Bar at the start of a battle. The spirit can only be purchased from Funky Kong's Shack for 500 Spirit Points.