This article is about the race course from Mario Kart: Double Dash!!. For Rainbow Road as a whole and other versions of the track, see Rainbow Road.

This is the second Rainbow Road to include Dash Panels, the first being the Mario Kart: Super Circuit rendition, and the first to feature rails in only certain parts of the course. It features a helix and a large pipe that launches drivers to the highest point of the track after reaching the very bottom (a possible precursor to the Launch Star featured in later Rainbow Roads). It also contains giant rainbow floating sculptures of items, and rains stars that racers can pick up. Depending if the mode is in split-screen or not, Rainbow Road takes place either over a city or in deep space. The city located below the course resembles Mushroom City, according to the design of some of the buildings. Although there are no visible clouds in the sky, their reflections can be seen on the track surface. 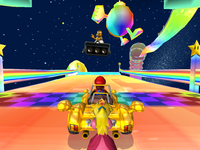 Mario and Peach starting a Time Trial on Rainbow Road

The track begins just before a ramp with a Dash Panel on it, which sends the player flying into a somewhat straight, downhill section of a track. This part of the track tends to be very bumpy and causes Shells and Eggs to bounce around, which hinders their homing skills. After a slight curve to the right and a straight road, there is a sharp pair of switchbacks, which is followed by another Dash Panel that sends the player flying. The ramp actually leads to a road lower than the previous, both with lengthy Dash Panels on a straight road that leads the player into a helix with multiple Dash Panels on it.

The helix spirals upwards to the left. Dash Panels and Item Boxes are present in this helix. The Dash Panels can help the player speed up, or help the player plummet to their doom until Lakitu saves them. Past the long helix is a bumpy road that is initially straight, but soon begins curving. Shooting stars hit here and become Stars for the player to pick up. Past the wavy road is a curve to the left and a pipe. Any item thrown in the pipe gets destroyed, and players are invincible when blasted up the pipe.

When playing in split-screen mode, the city and the item sculptures are removed.