This article is about the race course from Mario Kart: Double Dash!! and retro course in Mario Kart DS. For other race tracks with the same name, see Luigi Circuit.

Luigi Circuit is the introductory track of Mario Kart: Double Dash!!, serving as the first course of the Mushroom Cup and All-Cup Tour in the game. It is Luigi's home track of the game. The course shape is a distorted stadium that is pinched in the middle, with several dash panels on both U-turns. Because of this, racers can see each other drive in opposite directions in the middle of the course. A Chain Chomp is located at the entrance of the first U-turn, attacking racers that drive too close to it. In every other setting than 50cc, the barrier separating both sides is removed, making most of the first and second halves of the course overlap. However, going through both U-turns is still required to complete a lap. The layout of this course bears a resemblance to the layout of the AVUS circuit in Germany.

Luigi Circuit reappears in Mario Kart DS as the fourth and final course of the Shell Cup.

The course starts off next to what looks like a building for box seats with a garage below. Players can drive on either side of the main road leading up to the first turn, which goes to the left, passing a Chain Chomp in the process. In the background, a rank "A" mansion from the end of Luigi's Mansion can be seen. After the turn, players once again enter the merged lane on their way back up to the start/finish line to start the cycle again on the next lap. A lake can be seen on the right, but no life is seen in it. After the second wide turn, which also goes to the left, the lap is completed. The course somewhat resembles the layout of Luigi Raceway from Mario Kart 64.

In split-screen mode, the blimps that fly above the course and the flowers are missing.

There are no shortcuts in the 50cc version of the course. If the difficulty is above 50cc, players can go far to the right side of the merged lanes to find an alternate route with two Double Item Boxes. Players take this shortcut behind the Chain Chomp and reach quickly the slope with dash panels of the first corner. However, sometimes the shortcut may be blocked by the Chain Chomp. There is a similar path before the final turn.

To unlock the staff ghost (using Luigi/Mario in the Red Fire kart), the player must achieve a time faster than 1:29.000. 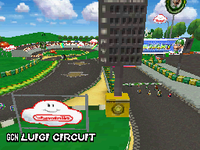 Luigi Circuit reappears in Mario Kart DS as the fourth and last course of the Shell Cup. The course's map has been rotated 180 degrees. This rendition of Luigi Circuit is almost identical to the original, although the long straightaways are notably wider and the shortcuts were removed. The barrier that was seen in 50cc in the original version has been removed completely. The blimp as seen in GBA Luigi Circuit is also visible, but only in the demo version of the game. The background has also been reduced to a flat image instead of actual models. The course was playable over the game's Wi-Fi.

This course shares its introduction fanfare with nitro courses Figure-8 Circuit, Waluigi Pinball, and Mario Circuit. It is the only retro course to have this theme.

There are two missions that take place on GCN Luigi Circuit.